President awards Medal of Honor to hero of COP Keating

WASHINGTON (Feb. 11, 2013) -- President Barack Obama placed the Medal of Honor around the neck of former Army Staff Sgt. Clinton L. Romesha during a ceremony Feb. 11 in the East Room of the White House. 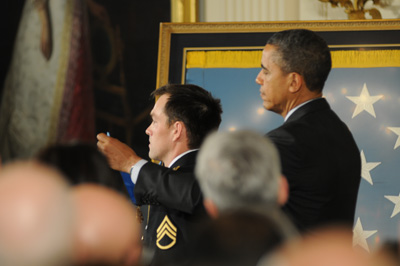 President Barack Obama placed the Medal of Honor around the neck of former Army Staff Sgt. Clinton L. Romesha during a ceremony Feb. 11, 2013, in the East Room of the White House.

On that morning, Combat Outpost, or COP, Keating, manned by only 53 Soldiers and situated at the bottom of a steep valley, came under attack by as many as 300 Taliban fighters.

During the fight, the perimeter of COP Keating was breached by the enemy. Romesha, who was injured in the battle, led the fight to protect the bodies of fallen Soldiers, provide cover to those Soldiers seeking medical assistance, and reclaim the American outpost that would later be deemed "tactically indefensible."

The president said that upon learning he would receive the Medal of Honor, Romesha displayed the brand of humbleness typical of many Soldiers.

"When I called Clint to tell him that he would receive this medal, he said he was honored, but he also said, 'it wasn't just me out there, it was a team effort,'" the president said. "And so today we also honor this American team, including those who made the ultimate sacrifice." 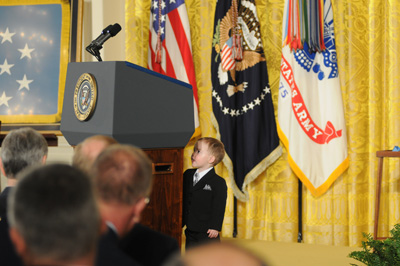 In advance of the Feb. 11, 2013 Medal of Honor ceremony in the East Room of the White House, Colin Romesha, son of Medal of Honor Recipient former Staff Sgt. Clinton L. Romesha, investigates the lectern that would later be used by President Barack Obama.

"Each of these patriots gave their lives looking out for each other," Obama said. "In a battle that raged all day, that brand of selflessness was displayed again and again and again, Soldiers exposing themselves to enemy fire to pull a comrade to safety, tending to each other's wounds, (and) performing 'buddy transfusions,' giving each other their own blood."

The president said on that day, it wasn't just Romesha who earned recognition for his actions, it was dozens of Soldiers. From that battle, Soldiers earned 37 Army Commendation Medals, 27 Purple Hearts, 18 Bronze Stars and nine Silver Stars, the president said.

"These men were outnumbered, outgunned and almost overrun," Obama said. "Looking back, one of them said, 'I'm surprised any of us made it out.' But they are here today. And I would ask these Soldiers, this band of brothers, to stand and accept the gratitude of our entire nation.

"God bless you, Clint Romesha, and all of your team," the president said. "God bless all who serve. And God bless the United States of America."

The president then asked that the Medal of Honor Citation be read, and following that, he placed the medal around Romesha's neck.