WASHINGTON (March 24, 2009) -- Ten servicemembers and civilians were honored as part of the Department of Defense Women's History Month Observance and Awards Program, March 19.

"For generations, women across our great land have helped make our country stronger and better," said Gail H. McGinn, deputy undersecretary of defense for plans. "They have improved our communities and played a vital role in achieving justice and equal rights for all our citizens. The DOD joins our nation to recognize the many contributions women make to our society and ensure that the history of American women is recognized." 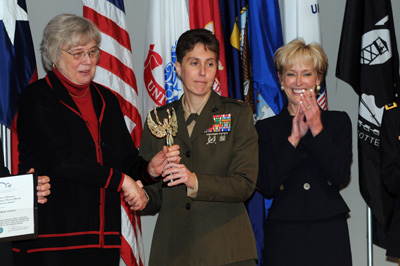 Gail H. McGinn, deputy undersecretary of defense for plans; Marine Corps Maj. Denise Garcia; and Sharie Bourbeau, assistant deputy chief of naval operations, manpower, personnel, training and education were present March 19, at the 2009 Women's History Month Observation and Awards Program at the Women in Military Service for America Memorial. Garcia was the recipient of recognition in part for her leadership during the military surge in Iraq that led to improved security in the Al Anbar Province.

The servicemembers were honored as winners of the 2009 Foreign Language and Science, Engineering and Math Role Model Award. The ceremony was held at the Women in Military Service to America Memorial at the gates of Arlington National Cemetery.

Army Brig. Gen. Rhonda Cornum, director, Comprehensive Soldier Fitness, gave the keynote address at the event. The general said during her years as a junior officer, she had been largely unaware of the challenges women had faced in military service prior to her arrival. She said it was those who came before her who carved the path.

"We really need to recognize and celebrate those ladies who just kind of went through uncharted territory with machetes," Cornum said. "People like me who come after that think that path has always been there -- and it just has not been. I really did not appreciate that until somewhat recently."

Cornum also said that there are many who could be the best at what they do, but that it is simply a matter of letting those people compete.

"We will then invariably get the best performance for the entire force," she said.

Coast Guard Lt. Cmdr. Andrea Lynn Sacchetti was one of the 10 award winners recognized at the ceremony. She has served in uniform for 13 years and has been a helicopter pilot for the Coast Guard for about a decade. She said that the women of the Coast Guard who came before her have paved the way, allowing her to progress in her own career.

"There are a lot of women who have done a lot of things before me, so it gave me the opportunities to do the things I want to do with my job," she said.

Sacchetti does mostly search and rescue for the Coast Guard, she said. She was nominated for the award in part for her service in the Arctic, where she was hand-picked to lead the Coast Guard's first land-based, forward-operating location in the region during Operation Salliq.

"I was chosen to be the senior aviator for the Coast Guard's first forward-operating location base up in Barrow, Alaska -- I ran an aviation detachment up there," she said. "We are doing research to see what kind of Cost Guard assets we may or may not need to place up in the Arctic as a result of sea ice moving away from the land."

In the Arctic, she said, dangers include both weather and indigenous animals.

"The weather can be unpredictable, and in the Arctic you have to worry about predators as well, if you do have to do an emergency landing," she said.

Sacchetti said she expects next to serve in a staff job or as an operations officer.

Army Lt. Col. Felicia Langel was another of those chosen to be honored at the ceremony. She is a veterinary corps officer and holds a PhD in biomedical research. She works now at the Uniformed Services University, but also served at the U.S. Army Medical Research Institute of Infectious Diseases at Fort Detrick, Md. There, she studied both anthrax and Q Fever.

Langel also worked to help both grade school and high school students develop a better appreciation for both science and math by bringing them into the laboratory and exposing them to science and technology that many students would not see until college-level courses.

"For the younger students it's very basic chemistry and biology," she said. "But what we try to do is put it in a real world scenario so they can appreciate there is a value to learning science -- so it's not just science text books, but a real life application for science. In fact, we expose them to experimental procedures that usually people learn in college."

She said sometimes the concepts are a little advanced for some young students, but the goal is not to teach them science but give them an appreciation for it -- to spark an interest and show them they can do it too.

"It's not important to us if some is over their heads or not, what we are trying to do is excite them about the possibilities and to just see a glimmer of comprehension -- it is rewarding for us," she said.

Langel said she hopes now to become a professor at the Uniformed Services University, and would like to continue working with youth as well.

The full list of winners for the event includes: