WASHINGTON (June 22, 2019) -- In the Pentagon courtyard yesterday, Kelly McKeague, director of the Defense POWMIA Accounting Agency, told several hundred family members gathered for the event that they are more than just the families of those who were lost in conflict overseas.

A man speaks from behind a microphone. In the background is a blue curtain. In the foreground are the backs of the heads of the audience.

Joy Brinduse and her brother, Peter Lautzenheiser, attend a ceremony in the Pentagon courtyard marking the founding of the National League of POW/MIA Families, June 21, 2019.

"We call you family members, but you are so much more than that," he said. "You perform multiple roles for us: You are partners with us. You are influencers. You are evangelizers. You are friends. And more importantly, you are loved ones to us."

McKeague told those gathered that he regularly reminds members of his DPAA team what the most important aspect of their mission is.

"I don't care how many Ph.D.s you have, I don't care how well-renowned you are in your career field -- and we have some very talented, world-renowned individuals -- none of that matters when serving this mission," he said.

Pointing to his own heart, McKeague said, "what matters is what they bring from here, and it's here that allows them to serve you with passion, with talent, and, I don't say this lightly, with devotion."

Ann Mills-Griffiths, chairman of the board of the National League of POW/MIA Families, said she and all those waiting for the return home of their loved ones deeply appreciate the work of the DPAA.

A man and woman stand outdoors and speak to each other, face to face.

"We're all grateful for the support that is given to us by the Department of Defense writ large, as well as DPAA and all of the other agencies, certainly including [the Defense Intelligence Agency's] Stony Beach [element]," she said. "They are there to help DPAA, and they are the only group focused solely on what you are interested in -- Vietnam War accounting. So they are very special to us."

Joy Brinduse and her brother, Peter Lautzenheiser, attended the ceremony in the Pentagon. The two lost their younger brother, Michael Lautzenheiser, in October 1971, when the CH-47 Chinook helicopter he was in went down in Vietnam. He was serving as an Army helicopter flight engineer.

A man and woman stand aside each other. 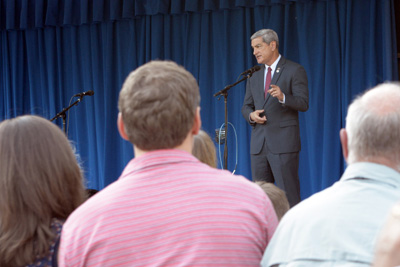 Kelly McKeague, director of the Defense POW/MIA Accounting Agency, speaks at a ceremony in the Pentagon courtyard marking the founding of the National League of POW/MIA Families, June 21, 2019.

Brinduse said the bodies of four of the 10 men who had been on board the aircraft that day eventually washed up on shore and were repatriated, but her own brother is still missing.

"He just turned 20 and he was on his second tour in Vietnam," said Lautzenheiser, who served in Vietnam as an Army helicopter pilot, and who retired after 42 years of service in 2011. "We both enlisted voluntarily. I think I was 19 when I entered service. He was 18. We had a family history of military service. Our father was in the Air Force even during the time we served in Vietnam."

Joy said another brother also served in the Navy.

The two siblings say they hope to find their brother soon. Their parents are both still alive, they said, and their father will turn 100 years old in just a month.

"That's part of our story, that our parents are both still alive," Lautzenheiser said.

Brinduse said she knows, from talking with many other families whose loved ones have been returned, that it brings great closure.

A man leans over to shake hands with a woman seated in a chair.

"Peter and I have spoken at quite a few events," she said. "And one of the themes of our talks is you don't have closure. We have met enough people who have had the remains of their family member returned, who told us it does give closure. So that's what we're looking for."

Cindy Stonebraker's father, Air Force Lt. Col. Kenneth Stonebraker, went missing in Vietnam in October 1968. He had been on a night reconnaissance mission. She had just turned five less than two weeks before she learned of the loss. 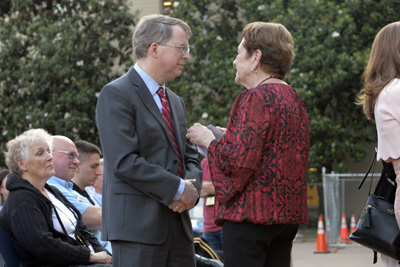 "I remember the blue car with the yellow writing that said United States Air Force on it coming to the door," she said. "Even as a little kid, we knew what that meant. I remember two men coming to the door -- one an older man and one a younger man. The older man did all the talking. You could tell the younger man didn't want to be there either. He just looked down. And I was a little girl, and was looking up. I vividly remember his face."

Stonebraker said her family never talked about the loss, and so for some 45 years, she'd made no inquires about the remains of her father. She said she hadn't known that it was even possible to do such a thing. Then, she said, about seven years ago, she came across a group of motorcyclists at a rest stop who were carrying the POW/MIA flag.

"I walked up to them and said my dad is still missing in Vietnam," she said. "They told me that I was the reason that they did what they did."

That meeting got her started in looking for her dad. Sometime later, Stonebraker said, she was invited to ride with those motorcyclists to Americus, Georgia. There, she met seven other people who had lost parents in Vietnam.

"That forever changed my life," Stonebraker said. "It was the first time in my entire life I felt like I belonged someplace, and I was around people who completely understood me."

A circular logo bears the words "Honor Their Service -- Fulfill Their Trust" and "POW/MIA -- You Are Not Forgotten."

Later, she said, she attended a meeting of the National League of POW/MIA Families where she learned she could have a memorial marker for her dad at Arlington National Cemetery, and also have his records. She said she also met men who had known her father.

"One of them actually participated in helping my dad buy a dollhouse for me for my birthday," Stonebraker said. "I had tons of questions about everything, not only about the planes and the missions, but also the stupid things, the stuff I never got to learn as a little girl: what his favorite color was and was he good at math, and what was his first car? They couldn't answer all the questions, but they were able to answer some of them. These guys spent a lot of time together."

DPAA, she said, is impressive in that it is one of very few government agencies that makes such an effort to connect directly with those it serves. She said she's impressed that it's possible, for instance, for family members to meet with and talk with DPAA's leaders to address issues and concerns.

David L. Norquist, who is performing the duties of the deputy secretary of defense, greets Joy Brinduse, during a ceremony in the Pentagon courtyard of the founding of the National League of POW/MIA Families, June 21, 2019.

"I don't know of one other organization that allows you access to their top people," Stonebraker said. "It is really great to see them, us, all working together for one common goal."

McKeague said that over the years, since the first missions were undertaken to find those lost in Vietnam, DPAA and its predecessor organizations have found and repatriated close to 1,000 service members. But work remains, he said. Today, about 1,588 still remain missing in Vietnam, Laos, Cambodia and China.

Technology, he said is helping DPAA with that search.

"DNA is first and foremost in having the most progress," he said. "The Armed Forces DNA Identification Laboratory at Dover Air Force Base, [Delaware,] are patenting techniques now that can take a degraded sample of bone and extract DNA from it."

Scientists at the forensic laboratory in Honolulu are also patenting a new clavicle comparison technique, he said, explaining that a clavicle is as unique as a fingerprint. New technology to aid in the search also includes underwater excavations, unique sonar systems, and the use of unmanned underwater vehicles that can sonar scan and map out a search site.

A diver swims in green waters under a ship.

Finding lost service members and finally bringing them home is much more than a job, McKeague said.

"I think it also sends two strong signals: to veterans who have served -- these are their comrades in arms," he continued. "And more importantly, it sends a strong signal to those currently in uniform today, that should they go missing, this nation will do everything humanly possible to bring them home."

Following the courtyard event, visitors were taken into the Pentagon to view the exhibits on display in the POW/MIA corridor.