Vice chief kicks off 'Quad A' by recognizing innovators

NASHVILLE, Tenn. (March 30, 2015) -- The Army's vice chief of staff kicked off the 2015 Army Aviation Association of America conference here by highlighting some of the best aviation units in the Army.

"I am incredibly proud of the incomparable courage and competence of our great aviators," said Vice Chief of Staff of the Army Gen. Daniel B. Allyn, March 30. "I always have been, and always will be." 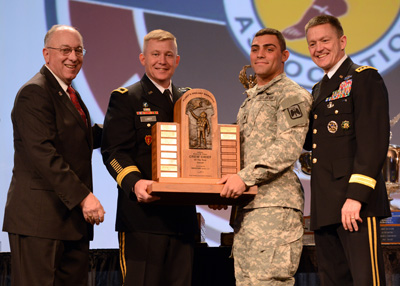 Allyn spoke before more than 1,000 Army aviators and aviation industry representatives at the beginning of a two-day aviation conference sponsored by the Army Aviation Association of America, known as Quad A.

First among those named by Allyn was the 2nd Battalion, 13th Aviation Regiment, out of Fort Huachuca, Arizona. The unit is a U.S. Army Training and Doctrine Command, or TRADOC, battalion and is responsible for training unmanned aerial surveillance Soldiers on four different aircraft systems.

"The 2-13 is a model of a unit that embraces innovation, by combining technologies, all the while maintaining their warrior ethos in a cavalry and scout mentality," Allyn said. "They are at the cutting edge of innovation and technology, learning how to best integrate our unmanned aerial surveillance and implement manned and unmanned teaming. In addition to their training mission, 2-13 deployed two companies to Afghanistan last year and supported the Department of Homeland Security in their continental United States mission."

"They are a picture of the future as we become even more reliant than we already are on the total force, executing diverse missions across the globe," Allyn said. "During 2014, the 'Voyagers' provided medium-lift capabilities to conventional, special operations, and multi-national forces. They performed missions across the spectrum of lift capabilities, including forward operating base retrograde, combat resupply, night insertion and extraction of special operations forces, and battlefield circulation. They represent true aviation professionals."

Finally, Allyn highlighted the 12th Combat Aviation Brigade, or CAB, out of Ansbach, Germany, later named the "outstanding aviation unit of the year."

Allyn said the accomplishments of those units "exemplify an aviation community moving in the exact direction we have in mind for Force 2025 and beyond."

During the opening ceremony, 11 aviation individuals and units were recognized. They include: