WASHINGTON (Jan. 14, 2014) -- Joe Wienand pulled his agency's military challenge coin from his coat pocket and held it in the air to display its artwork. He pointed to a small dot of green paint on its surface, less than 1/8 inch in diameter.

Wienand, who serves as director of the U.S. Army Edgewood Chemical Biological Center at Aberdeen Proving Ground, Md., said the coin was designed with that bit of artwork so he could use it to illustrate the toxicity of the chemicals the center works with.

His team, in cooperation with the Joint Program Executive Office for Chemical and Biological Defense, is responsible for designing, constructing, deploying and operating the Field Deployable Hydrolysis System, which will be used aboard the cargo ship MV Cape Ray later this month as part of a U.N. mission to destroy bulk chemical weapons from Syria. That mission is expected to begin Friday.

Aboard the ship Cape Ray, a team of 46 Army civilians from both ECBC and JPEO-CBD will use the two Field Deployable Hydrolysis Systems, or FDHS, to destroy those chemical agents over the course of about 90 days.

The Cape Ray was originally built in Japan for Saudi Arabia, said Carmen J. Spencer, the Joint Program Executive Officer for Chemical and Biological Defense. The Saudis used the ship to haul components of oil rigs. Today, the ship is owned by the U.S. Maritime Administration. It was modified for the chemical weapon destruction mission.

Modifications to the Cape Ray in advance of the mission include a collective protection system to ensure clean air in berthing compartments, hospital units, and operational areas, Spencer said. Also installed were 100 berthing units to accommodate the increased crew, a hospital trauma unit, and a medevac capability. To accommodate the medevac capability, a helicopter pad was installed on the ship.

"It's much safer that way," Spencer said.

Following the transfer of the chemical weapons, the Cape Ray will head out to international waters -- where, exactly, is still to be determined -- and the process of destroying those chemical weapons will commence.

Using the FDHS, Edgewood specialists will mix the chemical weapons with neutralizing agents such as bleach, water, or sodium hypochlorite, to render them unusable as weapons. In some cases it's expected the mix ratio will be nine gallons of neutralizing agent for each gallon of chemical weapon. The resulting mixture is waste material, called effluent.

The effluent from the neutralization process, hazardous waste, will be stored in approved containers aboard the ship. The UN has solicited bids to determine what commercial facilities will receive the effluent for disposal. Some 42 bids have been received. Spencer said an announcement on winners will be made soon.

Safety is a top concern during the mission, Spencer said, and the JPEO-CBD has worked closely with ECBC to make the mission a success.

"We could not accomplish this mission if we did not collaborate and work together," Spencer said. "The number one driver of this mission is not schedule, it is safety. The operators coming from ECBC, physically deployed on the ship, are performing a dangerous mission. Within the PEO, my people on the ship will be working side-by-side with them and will be performing a dangerous mission. What has always been preeminent in our working together is how can we protect the people, the ship and the environment, to accomplish this mission successfully. We are very confident we will be able to do that."

Wienand said the ECBC operators aboard the Cape Ray are experienced with the handling of chemical weapons. He also said the systems aboard the ship have been engineered to ensure crew safety.

"We have very, very experienced operators, people who have dealt with this material before," Wienand said. "All the material will be monitored with chemical monitors so if any vapor gets out we can close the operations, and we can decontaminate. These very experienced operators know how to handle these materials, and I think they are going to do a fantastic job of making this a safe operation."

Spencer said the team from ECBC, JPEO-CBD, and the Cape Ray crew, embarked on a five-day sea trial, Jan. 10.

"We hope to validate all of our equipment, the emergency procedures, operating procedures, and integration with the ship," he said. Afterward, he said, the crew will conduct an after-action review.

It was a little more than a year ago, Dec. 27, 2012, when defense officials at the Pentagon gathered to address the concern of dealing with chemical weapons from Syria, Spencer said.

Within the United States, destruction of chemical weapons comes to the JPEO-CBD, Spencer's responsibility. So the task came to him to find a solution. He worked with Wienand's ECBC to look for a solution to the problem.

"We collectively came together and did a global market search," Spencer said. "We quickly realized that the U.S. did not possess that capability."

The U.S. Strategic Command subsequently published a Joint Emergent Operational Needs Statement that directed JPEO-CBD to put together such a capability, no later than July 1, 2013.

"Basically, we took an acquisition system that was designed to provide something in seven years or less, and in less than six months (had to) provide a proven operational capability," he said. "Together with ECBC and my organization, we determined the best available technology -- a proven technology that we had over 10,000 hours of operating, and a technology that we had used in three locations in the United States."

The prototype solution, the FDHS, was finished June 27 -- three days in advance of the July deadline. The FDHS is air-transportable and fits inside two 20-foot containers. 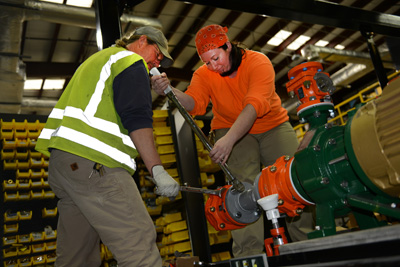 "It is a proven capability that can effectively neutralize and destroy all known chemical agents, anywhere on the planet," Spencer said. "It is a portable, transportable system to accomplish that mission."

"It's a very small chemical plant that you can move wherever you need it to be operated," Wienand said.

While these chemical weapons destruction processes, facilities and technologies existed already in the United States, what did not exist -- and what was created with the development of the FDHS -- was a way to make that capability portable.

The system was designed and built at Aberdeen Proving Ground by Army civilians within ECBC. So far, the team there has built three completed units -- two are currently on the Cape Ray. The team is in the process now of building a fourth FDHS, and will build an additional three -- for a total of seven systems.

"It's been a very busy year," Wienand said. "It is not our job normally to produce things, but in this case it was the only way to do it quickly enough so we wouldn't have to put a contract out and wait for people to bid on it and produce it."

Initially, the expectation was that the destruction of Syrian chemical weapons would happen on land, but that changed.

"The ultimate decision was to deploy it at sea," Spencer said. "When you deploy it at sea, in international waters, there is no potential for harm to civilian populations in nearby areas. There (are) operational advantages to doing it at sea."

Wienand said the decision to go to sea produced some challenges.

"It took a little bit of engineering to figure out how to ruggedize the system to make sure it is survivable," he said. "On the shipboard application we had to run some special engineering studies to make sure it was effectively braced and bracketed so it wouldn't have any problems when it is transported on ship or operated on a ship."

In addition to making accommodations for at-sea operations, accommodations also had to be made for the constrained space, Wienand said. On land, all components of the process would be laid out on the same level. In the constrained environment of the ship, the whole process had to be adjusted for deployment on multiple levels. It forced engineers who installed the system to consider the three-dimensional nature of the ship.

"They want to be able to use gravity as much as possible," Wienand said. "They want gravity to feed the effluent down to the tanks. Many of the tanks are down below the FDHS unit. There is support equipment on the same deck. There is support equipment on the deck above. They tried to position it all, with the ship engineer, so that whatever that piece of equipment was and the way the operation was supposed to work, it would be optimum. So a lot of the electrical material, and the things that you don't have to worry about in terms of pumping liquids, it's above the FDHS. The liquids, the things that you have to handle, it's either on that deck, or below. The engineers have done a great job."

In a maintenance building, a pre-built frame for an FDHS stands nearly empty, save for two electric motors and pumps on one end, and a bit of brightly-colored plumbing. Two workers together bolted another part onto the system, which when complete will contain nearly 2,000 such parts.

Jeffrey Gonce, supervisor of the field maintenance branch at ECBC's Chemical Biological Applications Risk Reduction unit, is responsible for a team of 20 Army civilians, eight of whom constructed the existing three FDHS units already in existence, and who are now building the fourth. It takes about two weeks to assemble a system from off-the-shelf parts.

Gonce said he has 26 years of experience working in the Army facilities that are responsible for destroying America's own chemical weapons stockpile. Because of his experience as a field maintenance technician, he was called on to offer guidance in the design of the FDHS.

"They were having some difficulties with designing the plumbing," he said. "So they brought me in to kind of facilitate some of the plumbing, how it flows ... to get the right agents and reagents going to the right locations at the right time."

Design of the system, he said, drew on existing chemical weapons destruction facilities he was already familiar with.

"We took the plant designs, and we figured out the common denominators between them and shrunk them down to make one system, a portable system," he said. "We took the three plants and three processes and combined them together to make one process -- we came up with the FDHS."

Gonce said his team has embraced the mission so far. "They stood up to the challenge that was put before them," he said, adding that when his team ran into difficulties constructing the FDHS, because in some cases the blueprints for the system didn't match the realities of actual construction, his team was able to contribute by improvising and making the system work.

"Things didn't fit like we thought they would, because we didn't have the actual boxes and material at the time," Gonce said. "He redesigned it so it would all fit the way we wanted to make it work."

The operational part of the Cape Ray mission is expected to take 90 days, though with perfectly calm seas, it could take as little as 45.

"It will be one less nation on this planet that will then possess chemical weapons," Spencer said.