WASHINGTON (June 18, 2012) -- The immense ballroom at the Washington Hilton here had a kind of moody haze hanging in it the evening of June 16. Beams of light cut through the air and crisscrossed the room, lighting up tables and Soldiers dressed in their military finest.

All the tables were decked out with formal place settings, stemware, neatly folded linin napkins, and a military coin in a folded card that commemorated the Army's 237th birthday and 2012 Army Birthday Ball here that would cap off a week of celebration across the force. 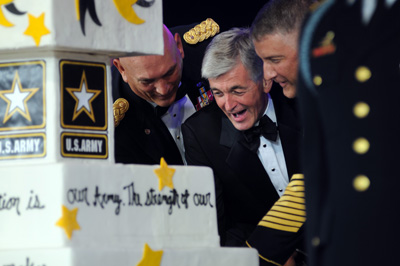 Chief of Staff of the Army Gen. Ray Odierno, Secretary of the Army John M. McHugh, and Sgt. Maj. of the Army Raymond F. Chandler III cut the Army birthday cake at the 2012 Army Birthday Ball, June 16, 2012, in Washington, D.C.

It could have been a scene from an old movie: the bride of at least one Soldier wore a formal ball gown that was easily four-feet across at the bottom. Most Soldiers were in mess dress or service dress, with mini-medals hanging from the breast -- some had the full-sized medals hanging around their necks. Some were in wheelchairs, or walked with canes -- these were the Soldiers who had been injured in combat or during training.

On a platform in the reception area, a Soldier sat above the crowd and played piano. Junior Soldiers, with their spouses at their sides, shared stories with each other, and even with the senior-most officers and enlisted in attendance.

This was the start of a spectacular evening in the nation's capital, the 2012 Army Birthday Ball, the likes of which come only once a year. It's an event where the Army celebrates both the Army and the Soldiers who are its most important assets.

"When they do stuff like this, they tend to do it big," said Sgt. Patrick M. Wise, a National Guard Soldier who attended the ball with his wife, Kristinn.

Wise works as a human resources specialist at Fort Belvoir, Va. He said it's the first time he's attended the Army Ball, and he has always wanted to experience it at least once.

"We've never had the opportunity to go to a ball like this where I was stationed previously," he said. "Also, to preserve tradition. We come together to honor the Army, to honor how long it's been standing, and where we've come from."

Wise said the number of Soldiers in attendance seemed surprising at first. But he also said there are so many veterans and Soldiers in the Washington, D.C., area that it makes sense so many would be there.

Kristinn had a different take. With a new daughter in the family, she said she was glad to get some time away, to be alone with her Soldier husband.

"I love him and I support him," she said. "I'm excited because it gets us away from our one-year-old."

"This definitely is the classiest thing I've ever attended," Matthews said. "It's truly an honor to be here tonight."

Matthews, who attended the event with his girlfriend, Julia, is currently in a Warrior Transition Unit in Orlando, Fla. He'll face a medical evaluation board soon, and understands his continued service in the Army will be in their hands. But, as an Army ordnance sergeant, he said he wants to stay in and continue serving.

Matthews said he joined the Army originally to be closer to its history, which now spans 237 years.

"I wanted to do something useful with my life," he said. "And I've always been interested in Army history and I figured the best way to appreciate it is to be a part of it."

Most formal military events involve a series of toasts. This year, at the Army's 237th Birthday Ball, the Army brought in several special guests to render the traditional military toasts.

Master Sgt. Ed O'Neil, a wounded warrior, and member of the World Class Athlete Program, rendered a toast to the Army.

The toast to Soldiers and their families was rendered by Sgt. Justin Olsen, who has earned an Olympic gold medal for bobsledding, and is also a member of the Army's WCAP.

Spc. Dennis Bowsher, also of the WCAP, will compete and represent the Army and the United States at the 2012 Olympic Games in London. He will compete in the modern pentathlon. Bowsher rendered a toast to guests of the ball.

Finally, with a toast to fallen comrades -- a toast always rendered with water, to recognize the suffering of service members who have been held in captivity -- was Col. Gregory D. Gadson. Gadson is director of the U.S. Army Wounded Warrior Program, and has served in every major conflict of the last two decades. A wounded warrior himself, Gadson rendered the toast from his wheelchair.

The Army turned 237 years old, June 14. Across the Army, units large and small celebrated with parties and cake-cutting ceremonies. At the 2012 Army Birthday Ball, hundreds of Soldiers and their spouses celebrated 237 years of service to the nation.

Sgt. Maj. of the Army Raymond F. Chandler III greeted those at the ball and thanked them for their service.

"Thank you for being here tonight and thanks again for your service and sacrifice for the nation," Chandler said. "Each of you is a vital part of our Army team, whether you are a Soldier, a Department of the Army civilian, or a family member. You know what it means to be a Soldier in the U.S. Army."

Chandler spoke for a few moments about the Army's history, and presented a challenge to those in the audience. He said he'd worked into his speech the mottos or nicknames of the Army's ten active-duty divisions, and challenged Soldiers to cheer when they heard the motto or nickname of their own division.

"237 years ago, our nation's leaders established the Continental Army. Ever since that day, our Soldiers have been SECOND TO NONE," the sergeant major said, emphasizing the last three words -- the motto of the 2nd Infantry Division. From one section of the crowd, hoots, cheers, and the Army's "hooah!"

"All right, so far, so good," the sergeant major said, confident the crowd was now paying attention.

Chandler managed to raise cheers from Soldiers, each time, and on cue, as he dropped the nicknames and mottos from each of the remaining divisions into his speech.

A TIME TO BE WITH SOLDIERS

Staff Sgt. Brian Scott, with the 382nd Military Police Battalion, out of Massachusetts, attended the ball with his wife, Tanya. Scott also serves in a civilian capacity as a Department of the Army civilian with the Natick Soldier Research Development Engineering Center. He works in the Combat Feeding Directorate, where MREs are developed.

"It's really good to get together here with a lot of other members of the military," Scott said. "To hear where they're from, where they've been, and hear everybody else's story. Also, to see the leadership of the Army, and the community that is the U.S. Army."

Tanya said she finally got to see some of the people her Soldier husband talks about from work. 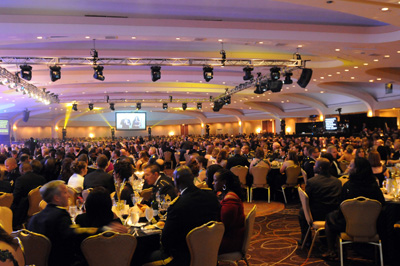 Hundreds of Soldiers and their families attended the 2012 Army Birthday Ball, June 16, 2012, in Washington, D.C.

"It's interesting to be a part of and see the senior leadership that he talks about so much, and to sort of see it first-hand and see how it works," she said.

Scott has been to Iraq once, and said while there, he was beneficiary of some of what is developed at Natick, especially the Advanced Combat Helmet and the Improved Outer Tactical Vest.

"It's been proven to save my life in a situation in combat. My convoy was under attack and we took an IED (improvised explosive device) to my vehicle, and I took shrapnel wounds. But mostly the ACH (Army Combat Helmet) is what saved my life, and the body armor," he said.

Scott said he joined the Army because of his grandfathers, who both served in World War II, one in the Pacific theater, and one in Europe.

"One of my grandfathers was in the Normandy invasion," Scott said. "I heard a lot of their stories growing up and I always wanted to be a Soldier. When it came that time, and I met a recruiter, I said 'I'm in.'"

There were a lot of Soldiers at the ball, a lot of food, a lot of drink, and a lot of dancing. The jazz ensemble "Afro Blue," from Howard University sang. The "World Class Rockers," which includes former band members from Journey, Boston, Santana, Steppenwolf and Lynard Skynard also performed songs like "Born to be Wild," and "Sweet Home Alabama."

But the evening wasn't just about the party. It was about the Army -- including those not there.

Chief of Staff of the Army Gen. Ray Odierno took the podium at the front of the ballroom, and asked the crowd to go silent -- forks and knives dropped, conversation quieted. During the previous week, the general said, he's traveled throughout the United States.

Odierno told the audience that while they were eating dinner, and enjoying time with their families and friends, 94,000 Soldiers are deployed around the world. Of those, about 68,000 are in Afghanistan, with thousands more deployed to Bosnia, Kosovo, the Sinai, and other nations in the Middle East.

Additionally, Odierno said, there are 90,000 Soldiers forward stationed to 150 countries around the globe.

"They represent us," Odierno said. "They represent our country -- the moral and ethical values that they bring forward, they represent America, the greatest country in the world. That's who we are and that's what we do."

The general also directed the attention of Soldiers to the far side of the ballroom, where Army Honor Guard Soldiers had earlier placed the American and Army flags. Adorning the Army colors are 183 campaign streamers.

"That's 183 campaigns that this Army has sweated for, has sacrificed, and bled for," Odierno said. "That's who you are. That's who we are. And that's who we will continue to be as we move forward."

ANOTHER CHAPTER IN ARMY HISTORY

"All of you in this room tonight are part of yet another chapter of what is the most glorious book of history this world has ever seen," said Secretary of the Army John M. McHugh. "Another chapter in the long proud history, the storied history of this great United States Army."

The secretary told Soldiers that for 237 years, the Army has been called upon to do more than just protect America's borders.

The history of the Army is "237 years of making a difference, 237 years of keeping not just America safe, but keeping this planet safe," McHugh said. "We are so blessed to be a part of that history, that tradition. You epitomize not only our nation's ideals, but also our military values: loyalty, duty, respect, selfless service, honor, integrity, and personal courage. And tonight, as always, it's a pleasure to be -- no, it's an honor, to be with all of you here, so many members of that Army family."

McHugh, Odierno, and Chandler together cut an Army birthday cake, brought into the ball by the Army's honor guard. Soldiers at the ball spent the rest of the evening dining and dancing, and celebrating the 237 years of Army history that they have all contributed to.