WASHINGTON (May 17, 2012) -- A day after Spc. 4 Leslie H. Sabo Jr. was posthumously awarded the Medal of Honor, Army and Defense officials inducted him into the Pentagon's Hall of Heroes.

During the May 17 induction ceremony, a new plaque bearing Sabo's name was revealed and placed on a wall in the Hall of Heroes in the Pentagon, permanently enshrining the Soldier's name there along with the names of nearly 3,500 others who also earned the honor. 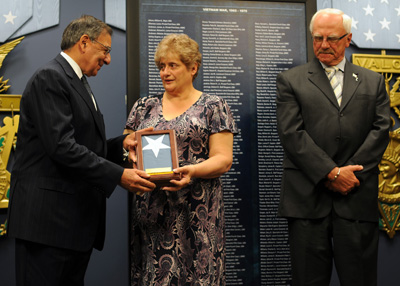 Secretary of Defense Leon Panetta presents Rose Mary Sabo-Brown, widow of Medal of Honor recipient Spc. 4 Leslie H. Sabo Jr., with the Medal of Honor flag, during a ceremony at the Pentagon Hall of Heroes, May 17, 2012.

"With this Medal of Honor, a warrior is held up to the American people as an example to all fellow men and women, with the embodiment of (our) highest ideals displayed," said Chief of Staff of the Army Gen. Ray Odierno. "Our most solemn professional obligation is to honor heroes, like Specialist Sabo, by retelling these stories of valor and passing them on to future generations."

Sabo, a rifleman and part of Company B, 3rd Battalion, 506th Infantry, 101st Airborne Division, was killed in action 42 years ago this month, May 10, 1970, while conducting a reconnaissance patrol in Se San, Cambodia.

"He gave his life so that his brothers, who had fought side-by-side with him, could live," Odierno said. "There is nothing more that our Army or nation could ever ask of an American Soldier. Specialist Sabo is the epitome of a hero and he will never be forgotten."

Secretary of Defense Leon Panetta explained how Sabo and his family had come to the United States after World War II to escape Soviet-controlled Hungary. They settled in Pennsylvania, became American citizens and pursued the American dream.

"Called an average guy by high school classmates, Les played basketball, joined the bowling club, went to work at a steel mill and, as I said, married an Italian girl," Panetta said. "In short, Les was living the American dream."

But, Panetta said, Sabo knew that being an American meant more, that it might mean sacrifice.

"Les had learned the lesson of service and sacrifice at a young age from his immigrant parents," Panetta said. "When his family's adopted country called him to serve in April 1969, he answered that call, he put on the uniform of the United States of America and, as importantly, the United States Army, and in an instant, he went from average to exceptional."

It took more than 42 years for Sabo to receive recognition for the heroic actions that cut his life short in Cambodia. That, Panetta said, is a problem.

"It has taken over 40 years to correct this wrong," he said. "And nobody has said this, but frankly I think we owe the Sabo family an apology for a citation that somehow got lost."

Panetta said the initial Medal of Honor citation could have been lost in the "fog of war," or it could simply have been government bureaucracy, "but when somebody is a hero, when somebody puts his life on the line for others, and does what Les Sabo did, that sacrifice must never be lost."

Leslie had an older brother, George, who also spoke during the ceremony. George thanked all those who worked to get the medal process started, wrote the initial citation, discovered that lost proposed citation amongst archival material at the National Archives, and who subsequently ensured it would be researched, moved through Congress and ultimately result in the award of the medal to his brother.

"All the people involved in completing this Medal of Honor presentation, I am sure, worked very hard to do the right thing and make it happen," George Sabo said. "And we here are all very grateful for their efforts."

Seven other Soldiers also died that day in Cambodia, and George Sabo read their names aloud at the ceremony, apologizing for choking up while thinking of the sacrifice those other Soldiers had made.

"I also want to honor the seven other men who died that day: Larry DeBoer, James DeBrew, Fred Harms, Tom Merriman, Ernie Moore, Don Smith and Leslie Wilbanks," George Sabo said. "These men, along with my brother, gave the ultimate sacrifice that day. And we will remember them in our hearts. For their families here today, I want you to know that the Sabo family considers them all heroes and this Medal of Honor is for them also."

"I am so proud that my husband Leslie Sabo has received the Medal of Honor and has been inducted into the Pentagon Hall of Heroes," she said. "My family and I are honored and happy that my Bravo Company family is with us today. Many of these wonderful people in my Bravo Company family lost loved ones in the Vietnam War. I want to share this honor, my love and admiration for those who made the ultimate sacrifice in battle, and their family members. Thank you so much for honoring Leslie, my husband, and the fallen brothers of Bravo Company. May God bless you all."