WASHINGTON (Nov. 19, 2009) -- The United Services Organization has sent out a lot of care packages over the years, but they've never put together a "for women only" kit -- until now.

Congressional staffers and members of Congress participated in a USO-sponsored event Nov. 18 on Capitol Hill to build some 2,000 care packages that contain items specifically targeted at female servicemembers. 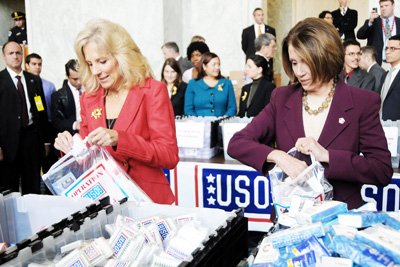 "We're going to do something different today, something that's never been done before," said USO President Sloan D. Gibson. "We're going to assemble USO care packages explicitly for our women -- for servicewomen that are serving in forward-deployed locations around the world."

Sloan said as many as 15 percent of servicemembers in the active component and 18 percent in the reserve component are women.

"They have needs and interests that are very unique and we are going to meet many of those needs with these new care packages that we have designed just for women," Sloan said.

"As a military mom, I have seen first-hand how acts of kindness and service, like today's effort, can improve the life of a servicemember," she said. "These are small acts, but like the veterans and volunteers who greeted my son when he touched base on U.S. soil after a year's deployment in Iraq -- they mean so much to our servicemembers."

Biden also said that women serving today are continuing in a long tradition of women supporting the armed forces.

"Women have always played a critical role in supporting our nation's defense and security and their role will only continue to evolve and grow in the future," she said. "I want to salute all the women around this country and the world who are doing their part to keep our country safe."

The care packages contained many items typical in care packages for servicemembers: hand wipes, sanitizer and food products for instance. But the packages also contained some items specifically targeted at female servicemembers, including two cosmetic products courtesy of Maybelline and a copy of the November issue of Cosmopolitan Magazine.

Deborah Marquardt, vice president of integrated marketing communications for Maybelline New York & Garnier, said even in a war zone, women like to be themselves.

"We want to support the brave women in uniform and we know how important the little things in life are -- beauty," she said. "Women intrinsically understand beauty and it can change their whole outlook to get a new lipstick or a mascara. Women like to feel like women no matter where they are and what context. I think anything that helps you feel like yourself and reminds you of back home and gives you confidence ... is important, no matter what the context."

"We're so thrilled to be here for the female troops," she said. "Cosmo's whole credo is about being fun, fearless and female, and I can't think of a better word to use for our troops around the world than to say they are the most fearless and most brave."

Kalajian-Lagani also said she doesn't think female servicemembers will have a problem finding time to enjoy the little slice of home being sent abroad specifically for them.