ADELPHI, Md. (Dec. 12, 2014) -- Scientists at the Army Research Laboratory have developed and are producing in small batches synthetic peptides they believe will serve as great replacements for animal-grown antibodies currently used to detect biological hazards.

Today, natural antibodies are used as part of handheld ticket assays that can be used to detect the presence of biological hazards such as botulism, anthrax or ricin, for instance. 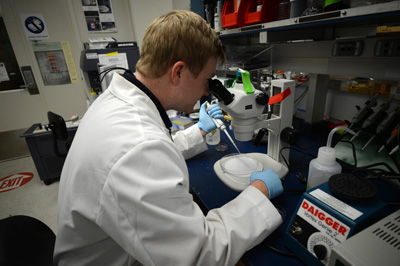 But those antibodies are expensive to produce, take a long time to produce, and are also fragile -- they are susceptible to temperature fluctuations and have a short shelf life. These shortfalls make them difficult to deploy into the field where they could be used by Soldiers to protect the force.

"One of the main problems with those assays is when they use the antibodies, if the antibodies get too warm, they will denature," said James J. Sumner, Ph.D, the chief of the Biotechnology Branch and a supervisory chemist in the Sensors and Electron Devices Directorate at Army Research Laboratory here. "They will essentially cook, and then they won't function anymore. What you want to do is make something that is easily producible and that is really rugged so that when you store it you don't have to have it refrigerated."

The synthetic peptides under development at the Army Research Laboratory can perform the same biohazard detection functions as the antibodies, but they are much more robust.

Temperature studies, for instance, have demonstrated the materials can be held at up to 90 degrees Celsius -- or about 194 degrees Fahrenheit, for as much as an hour "and we hardly lose any activity," said Dimitra Stratis-Cullum, Ph.D., the biomaterials team leader with the Sensors and Electron Devices Directorate at the Army Research Laboratory. "We've also done 70 degrees Celsius for a week."

Stratis-Cullum said the materials also hold up better when exposed to the environment, unlike the natural antibodies.

"We can take advantage of non-natural peptides and engineer them so they don't degrade in the environment," she said. "So things won't chew them up, like enzymes that are always present won't degrade them -- they are very stable."

Another benefit of the synthetic peptides is that unlike antibodies, they are easy to manufacture. Whereas antibodies must be grown in animals or engineered microorganisms, synthetic peptide sequences can be built on-demand, in a lab. So if customers need a specific set of detection tools, the appropriate type of synthetic peptides can be ordered to meet that demand and can be quickly procured.

With antibodies, "months and months of lead time (are needed) in order to be able to do that," Stratis-Cullum said. "And you can't build up a stockpile and store them because they only last about six months with special packaging. So there is a huge storage and logistics and manufacturing issue as well, even for the limited use." 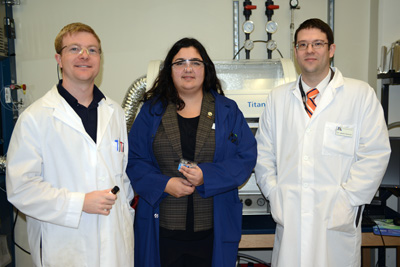 Postdoctoral scholar Matt Coppock; Dimitra Stratis-Cullum, Ph.D., the Biomaterials team leader with the Sensors and Electron Devices Directorate; and James J. Sumner, Ph.D, the chief of the Biotechnology Branch and a supervisory chemist in the Sensors and Electron Devices Directorate at the Army Research Laboratory in Adelphi, Md., have developed and are producing in small batches synthetic peptides they believe will serve as great replacements for animal-grown antibodies currently used to detect biological hazards.

With the synthetic peptides that Sumner, Stratis-Cullum and their team have developed, those testing agents can be produced quickly and inexpensively.

"We are doing the manufacturing so you can produce them on-demand and quickly," Stratis-Cullum said. "Anybody who has a peptide synthesizer can make one. That's a lot of companies. In the field of biotech they are common. You can go to a company and order a sequence. There are robots that make them."

"Once you have that sequence, you can go online and send them the sequence, and they will send you a vial to make 100 assays for maybe $100," Sumner said.

Right now, the development of synthetic peptides at the Army Research Laboratory is best targeted at hand-held testing kits that can detect nearly any kind of biohazard one's immune system might react to. But Stratis-Cullum said that's just the "lowest-hanging fruit." The future holds more promise for the work she and her team are doing at the Army Research Laboratory.

"The vision for this is now to bring it to integrated Soldier uniforms that sense and respond and self-neutralize," she said. "The newer versions of this could bind and inhibit it to make it inactive as well. So you could've been exposed, but the suit would help decontaminate and protect the Soldier."

This summer, the team at the Army Research Laboratory will demonstrate their work to researchers from the Army's Edgewood Chemical Biological Center and Army Medical Command, Sumner said. "We'll show that these function even though they are exposed to high temperature for a long period of time. And they still work as well as the traditional antibodies do."

If they are successful in that demonstration, the team at the Army Research Laboratory will transition their work to Edgewood Chemical Biological Center, who will carry it on in a way that will more directly benefit Soldiers.

"We would like to be able to provide them the techniques and the protocols and how we develop these things and help them along the way as they start developing the same type of recognition elements that they see as the highest priority," Sumner said.