WASHINGTON (Oct. 31, 2013) -- Delaney Saslav, only three at the time, nearly drowned while attending a pool party with her parents.

Delaney's father, Lt. Col. Adam Saslav, an infantry Soldier, credits quick discovery of the accident and cardiopulmonary resuscitation performed by family friend and former Soldier Dr. Jason De Luigi with putting Delaney on the road to a recovery from the incident. 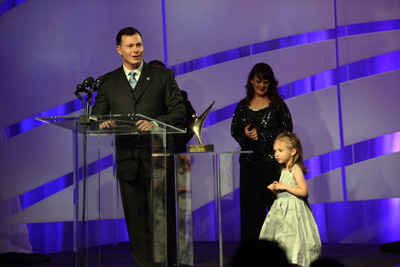 "Everybody credits proper CPR with allowing Delaney to have the ability to recover as well as she did," he said. "Most of it is the spirit of my daughter. But that life-saving treatment was absolutely critical to her having a chance."

Delaney had been unable to sit up or speak after nearly drowning in the pool. But she later was brought to the National Center for Children's Rehabilitation at the MedStar National Rehabilitation Hospital. It was there she learned to talk again, to sit up, and to stand.

Delaney is one of three who were honored by the MedStar National Rehabilitation Network with "Victory Awards," during an Oct. 30 ceremony in Washington, D.C. The award is given to "celebrate the victory of the human spirit and to honor individuals who best exemplify exceptional strength and courage in the face of physical adversity."

The other two recipients of this year's awards are Congresswoman Tammy Duckworth, who was injured Nov. 12, 2004, while serving as a UH-60 Black Hawk pilot in Iraq; and Adrianne Haslet-Davis, a ballroom dance instructor who was injured during the April 15, 2013, terrorist bombing of the Boston Marathon.

Delaney left the National Rehabilitation Hospital, or NRH, in a wheelchair in October 2012, and her dad said her recovery progressed from there.

"She soon started pre-kindergarten," he said. "I will never forget the phone call from my wife when she went to pick Delaney up from school and her teacher, Ms. Judy, rushed to the door to show the piece of paper with Delaney's name that she wrote herself."

Saslav spoke on stage before hundreds of event attendees at a downtown hotel. He found it difficult to keep the attention of the audience because he shared the stage with young Delaney, now five. Uninterested in her father's speech about the progress she had made following her accident, she drew away from him and stole his spotlight, dancing and twirling on stage, and delighting the audience.

"She experienced all the things that a typical four-year-old experienced, but it was because of the amazing work at NRH and the team there," Saslav said of his daughter's life after the incident.

The Army officer also thanked an unlikely member of the audience, Army Chief of Staff Gen. Ray Odierno and his wife, Linda. At the time of Delaney's accident, Saslav worked with Odierno at the Pentagon.

He said the general ensured he was given the time to be with his family following the accident, "so that Delaney and our family could move through what was a near tragedy, to what you see on stage today."

Off stage and after the formal portion of the award ceremony, Saslav said the Army played two important roles in the recovery of Delaney. The first, by ensuring he and family had proper medical insurance.

The second thing the Army provided for him, he said, was the family-type of camaraderie that allowed him to be home with his wife, daughter, and son while recovering from a tragedy.

"That is the complete and undying support from everybody inside my office, from the boss and everybody on down," Saslav said. "They were there through those initial four months in the hospital that I didn't work, to support me and to cover my duties as I was gone. They continued to be there through the entire process, always making sure we had the support we needed. It's a family that you can't get anywhere else." 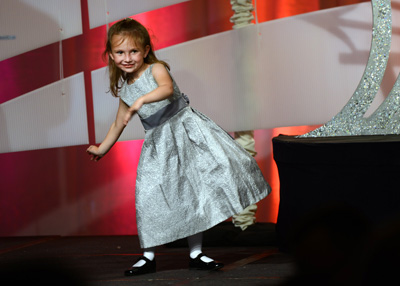 Illinois Rep. Tammy Duckworth was also a "Victory Award" recipient. She is a currently a member of Congress and a lieutenant colonel in the Illinois Army National Guard. Duckworth was injured in Iraq in 2004, when she was co-piloting a mission in a UH-60 Black Hawk helicopter. As a result of a rocket-propelled grenade launched at her helicopter, she lost both legs and partial use of her right arm.

On stage at the award ceremony, Duckworth stood up from her wheelchair on prosthetic limbs.

"Life hasn't been easy since I was injured," she said. "But I've done things I never dreamed of doing."

Aside from serving in Congress today, she has served within the Department of Veterans Affairs, continues as a member of the Illinois Army National Guard, advocates for veterans, and has even done several marathons in her wheelchair.

"My new life is just as rich as my old one, just in a different way," she said.

Duckworth said she was lucky to get the kind of medical treatment she received at then-Walter Reed Army Medical Center in Washington, D.C., following her injury. But she knows not everybody has access to that kind of care.

"For many Americans, that type of medical care is not guaranteed," she said. "So many who have suffered traumatic injuries don't have access to the medical care that can help them to achieve their fullest potential. I think we have a responsibility to stand with those who have suffered tragedy and encourage them to move forward with their lives, so they too can do great things."

Later, Duckworth said that after her injury in Iraq, the Army took care of her "as a whole person."

"It wasn't just about recovering from the wounds themselves, it was about what I was planning on doing after -- whether I was going to try to stay in or whether I wanted to get out, and go on with my life, post-military," she said. "That was critically important, because I needed a new mission. I was hurt and needed a mission and I needed to know what I was going to do next."

In her position as a lawmaker, and as National Guardsman, she knows how important it is that Soldiers are confident the Army will take care of them if they get injured -- the same way the Army took care of her after she was wounded.

Duckworth said as a lawmaker she is interested in improving the transition Soldiers go through as they move from active duty to their new status as veterans.

Duckworth said she was "deeply honored" to receive the Victory Award, but also said "this is not about me. It is about the men who saved me. It is about our military and our veterans

who continue to sacrifice every single day."