Reserve Soldiers 'more relevant' than ever

WASHINGTON (Jan. 31, 2012) -- Amidst concerns of budget and troop reductions, Reserve Soldiers remain a critical component of America's defense, said the chief of the Army Reserve.

During his visits around the force, Lt. Gen. Jack C. Stultz, chief, Army Reserve said the No. 1 question he's asked by Soldiers is "what's going on" with regards to budget and force cuts. Those Soldiers, Stultz said, are concerned about the future of their jobs and their relevance in America's defense. 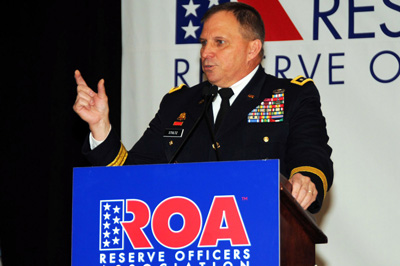 "My answer to the Soldiers is, 'You are going to become even more relevant than you've ever been to our national security strategy,'" Stultz said, Jan. 31, at a meeting of the Reserve Officer Association in Washington, D.C.

The Army will continue to lean heavily on the Reserve components for these services after it draws down its own Soldiers.

"Our nation and our military are going to be dependent on access to the Reserve components," Stultz said. And the nation expects the Reserve to be ready.

An operational Reserve, he said starts with capability. That means a force with capabilities that can be maintained, that is ready on short notice without the need for a lot of additional training, and that is accessible.

"That, to me, is the start of a definition of an operational Reserve," Stultz said.

An operational Reserve is a force made of Soldiers who are also civilians. Those Soldiers must be able to maintain their military skill set even when they are not in uniform -- so when they are called upon, they are ready. To make that happen, Stultz said, the Reserve must focus on being a force that provides skill sets that are shared among both the military and the civilian communities.

The Reserve component is able to maintain a ready cadre of Soldiers in the medical field because many of those Soldiers are working related jobs in the private sector. There, Stultz said, they are getting great training -- sometimes even better than what's available in the military. The same is true for engineers and other "hard skills" like electricians, carpenters and plumbers.

"To me, an operational Reserve is where you can have those capabilities," he said.

Stultz also said the future of the operational Reserve is going to involve modularity.

"The role of an operational Reserve in the future is going to be plug and play," Stultz said. "Where do we need these capabilities, and can you scale them either up or down to fit what we need?"

Stultz said a modular operational reserve could provide the capability needed, in the right amount.

"If I need some engineer capability, but I don't need a whole battalion, can you give it to me?" he asked.

Soldiers in the Reserve components need jobs, and they need employers that understand their service commitment. At the same time, the civilian employers of those Soldiers need some stability from their employees.

The Army Reserve championed the Employer Partnership of the Armed Forces program, before it was transitioned to the Department of Defense. That program now involves more than 25,000 civilian employers. The partnership provides good job opportunities to Soldiers, and quality employees to civilian employers -- employees, Stultz said, with background screenings who are drug free, healthy, and who possess a set of skills that are applicable in the civilian world

Soldiers have asked for three things from the Reserve, Stultz said. They want predictability -- and their civilian employers do too, they want the Reserve to put them and their skills to good use and above all, they don't want their time wasted.

Stultz said the Reserve recognizes that Soldiers have been to Iraq and Afghanistan -- they've trained hard for that, and they've got combat experience under their belts. Now, he said, they want to maintain that experience and skill -- they don't' want their time wasted with what they consider irrelevant training.

"Don't expect me to show up at a drill hall and sit in a classroom and listen to some PowerPoint presentation -- that's not relevant," he said, relaying sentiments he's heard from Soldiers. "Make the training worthwhile."

To that end, Stultz said, the Reserve is investing in simulator training, including those for weapons systems and vehicle simulators. "That is what we want that Soldier to experience when he comes to that drill -- something realistic."

Trained Reserve Soldiers want to put their skills to use, Stultz said. And the Reserve knows how to do that.

"That's were that predictability, that five-year model comes into play," he said. Four years at home for a Reserve Soldier means predictability for him, his family and his employer -- after that, they want the opportunity to put their training to use doing something meaningful for the Reserve.

"If you look at what's a huge demand now, it is a lot of stability, theater-engaged, security-cooperation types of work that we've been doing," he said. Included in those kinds of engagements are medical readiness exercises abroad in countries like El Salvador, Guatemala, Costa Rica, Panama, Columbia and Haiti.

In the past, units might have deployed to such missions for a month. Now, Stultz said, he could let units go for three months or more.

The Reserve could provide hospital units to the Southern Command, for instance, allowing expansion of engagement opportunities. Engineer units, he added, could be deployed a company at a time, for 90 days each and overlapping -- "Let them build a school all through the year."

Stultz said he told the Army's chief of staff if he could change one thing about the Army, he'd like to create an Army culture that supported the notion of "a Soldier for life."

Such a culture, he said, would provide Soldiers with the opportunity to move more easily, in either direction, between the Reserve and active components.

"We have to be able to provide this continuum where you can move back and forth, as you or the Army desires," he said.

Even Soldiers in the Individual Ready Reserve would be assigned to a particular unit for both muster and support. The effort gives Soldiers the ability to move back to military life if they want.

A "Soldier for life" culture, he said, provides Soldiers a way to continue to serve their country full time, or part time -- explaining that some Soldiers might want to serve part time, but simply don't' know how to make it happen.

For the Army, he said, it helps to prevent the loss of years of training and skill.

"If we're going to come down from 570,000 to 490,000 on the active side, think of the investment that is going to walk out the door if we don't have the right transition program in place," he said.

The Reserve is working closely with the Army to minimize that loss of investment, Stultz said. He also stressed the importance of informing Soldiers of their options as they prepare to leave the active component. Additionally, the important relationships the Reserve has built with civilian employers makes it easier for Soldiers to find jobs as they prepare to move out of the active Army -- and that makes it easier to choose to stay in the Army as a member of the Reserve.

"For every one of those that transitions into the reserve, that's one less recruit to pay a bonus to, that's one less triaging seat at Fort Jackson (S.C.) or Fort Benning (Ga.) -- because we've already invested in that Soldier," Stultz said.