WASHINGTON (Dec. 10, 2011) -- As part of a tradition now 20 years old, thousands showed up early morning at Arlington National Cemetery to place wreaths at the gravestones of those buried there.

This year, about 85,000 wreaths made their way from Maine to the cemetery -- donations from both Americans and from wreath manufacturer Morrill Worcester, of the Worcester Wreath Company. Worcester began laying wreaths at the cemetery in 1992.

This year, about 85,000 wreaths made their way from Maine to the Arlington National Cemetery to be laid by volunteers at grave stones there, Dec. 10, as part of the 20th annual Wreaths Across America event.

Thousands of volunteers, including civilians from Virginia, Maryland and Maine as well as other parts of the country, along with servicemembers, and young people from scouting and cadet programs, gathered in the Memorial Amphitheater at the cemetery before placing the wreaths.

Speaking to the crowd were both Morrill and wife Karen Worcester -- founders of the "Wreaths Across America" program. Volunteers from the program brought wreaths to Arlington and 740 other cemeteries this year. Also speaking were Kathryn A. Condon, executive director, Army National Cemeteries Program, and Wayne Hanson, chairman of the board for Wreaths Across America.

Hanson said the wreaths were a "thank you for the service and sacrifice" of those buried in the cemetery.

After Hanson's words, the crowd poured into the cemetery and volunteers gathered around the several tractor trailers that had carried the wreaths down the east coast from Maine. When the doors opened, volunteers passed boxes of wreaths out to the waiting crowds, who quickly distributed the wreaths among eager hands to place on grave sites. 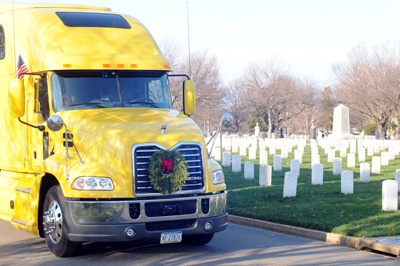 Multiple tractor trailers carried some 85,000 wreaths from Maine to Arlington, Va., for volunteers to lay at the grave stones of those buried in Arlington National Cemetery, Dec. 10, as part of the 20th annual Wreaths Across America event.

Jerry Gladwell, a Cub Scout Master from Manassas, Va. Was among those who placed wreaths on graves. With him was his son Scott, age 7, in a Cub Scout uniform.

"We do this to respect the Soldiers," Scott said. "They fought for us to be free."

Jerry said he didn't know what his son Scott, and Scott's friend Cohen -- just 6 and a half, and also a Cub Scout -- would gather from attending the event. But he said he had written down the information from the grave stone where he laid a wreath, and hoped to learn more about who was buried there. He also said many know about Arlington National Cemetery, but being there provides another perspective on sacrifice.

"For me, taking it in as a whole -- it's awe inspiring, you just don't think of the numbers of people here until you see all the stones. This are a lot of folks here," Jerry said. 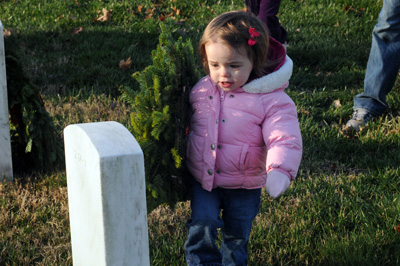 Nearby, Spc. Tyler Ahrens, a military policeman from the 488th Military Police Company, Maine Army National Guard, struggled to get two wreaths attached to a fairly large memorial to the servicemen who had been killed as part of the Battle of the Bulge.

Ahrens had come down from Maine for the event for the sixth time. This year was the second time the young Soldier had been asked to escort to the event Sir Stanley A. Wojtusik, a World War II veteran who fought in the Battle of the Bulge, and who now serves as member of the board of trustees for Wreaths Across America. Ahrens also escorted to the event Edith T. Nowels, member of the Wreaths Across America board, and sister of Medal of Honor Recipient Cpl. Bud Thorne -- who also fought in the Battle of the Bulge.

Ahrens said it was a "great honor" to escort the two to the Wreaths Across America event, and said he was humbled by the number of graves in the cemetery that represent so much sacrifice on the part of so many servicemen and women who were as young as himself.

Wojtusik, on a cane, and who had been held as a prisoner of war in German Stalag IV-B, near Dresden, for six months during WWII, didn't place a wreath himself -- Ahrens had placed wreaths for him at the memorial to Soldiers from the Battle of the Bulge. He said the wreaths represent a little bit of Christmas for Battle of the Bulge veterans -- during World War II, he said, those Soldiers were "deprived of Christmas by Hitler." But Wojtusik said the Wreaths Across America event was meant "to honor all deceased members of the services -- all veterans."