WASHINGTON (Aug. 09, 2010) -- Desktop computer users see his face each time they log in, reminding them to practice good cyber security.

It's "Sergeant Firewall," the fictional, cartoon face of the Army's information assurance program who now pops up on certain Microsoft Windows desktop installations on startup. He also stars as the sometimes hero of the program's comic strip, "On Cyber Patrol." 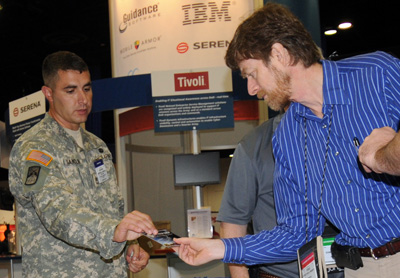 The Army Office of Information Assurance and Compliance produces the comic strip, videos featuring Sergeant Firewall and other products, to help simplify key information assurance messages and to make them more palatable to time-pressed Soldiers.

"The problem is, with AR 25-2, people are not going to read the regulation on their own," said Sgt. 1st Class George Sandlin, 9th Signal Command, NETCOM.

Army Regulation 25-2 is the Army's information assurance regulation, a more than 100-page document, Sandlin said, and a complicated read for Soldiers who have lots of other things to read and learn.

"What we did was we made video clips and cartoon strips for people to download," said Sandlin. "They can ... put it in their classes and their briefs and use this information to get the message out about information assurance."

Sandlin manned a booth at the recent 2010 Armed Forces Communications and Electronics Association's "LandWarNet" conference in Tampa, Fla. He handed out fliers about information assurance, and plastic cards that read "if you're reading this, you left your CAC unattended," and features Sergeant Firewall looking ready to administer discipline.

The cards, Sandlin said, are meant to take the place of an unattended CAC card at a coworkers desk or computer -- an information assurance no-no, he said.

Sandlin also handed out copies of the "On Cyber Patrol" comic strip. In one, "the colonel" is howling mad -- a Soldier has posted mission information to their "Foolbook" page. He must cancel their operation and asks Sergeant Firewall to bring the Soldier responsible to him. Elsewhere, the apparent enemy, working out of a cave, realizes their online window into the unit's mission has been closed.

"The face of this program is Sgt. 1st Class John Firewall," said Ed Beemer, Army Office of Information Assurance and Compliance. "That character resonates with troops, because everybody hears some sergeant barking at them all the time. And he has a nemesis, who is the 'International Cyber Criminal.' It's the structure of good and evil."

Beemer said the information their office produces is available on Army Knowledge Online, and is meant to help support commanders' local information assurance programs. The comic strips can be placed in installation newspapers, and the videos can be run on command information channels, for instance.

Army IA marketing tools featuring Sergeant Firewall can be found on AKO, under the "Self Service --> my Security" section.