LAKEHURST NAVAL AIR STATION, N.J. (April 26, 2007) -- Some 26 Airmen from the 11th Civil Engineer Squadron "deployed" to Lakehurst Naval Air Station, N.J., April 18, to participate in Eagle Flag, an exercise designed to give support personnel experience working with other support personnel while coordinating and executing the setup of a bare base.

Capt. Tracy Horan, 11th CES, acted as the deputy commander during the exercise. She helped oversee the work of about 40 civil engineer Airmen, including those from Bolling, from Air Force bases around the Air Force. She said the exercise gets those Airmen experience in working with others and with working in a host nation environment. 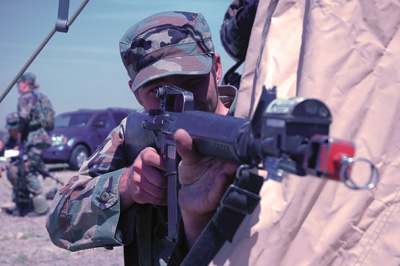 Airman 1st Class Evan Bingman, 11th Civil Engineer Squadron and "dirt boy" by trade, pulls security detail during an Eagle Flag exercise at Lakehurst Naval Air Station, N.J. Airman Bingman and nearly 30 other members of the 11th CES, participated in the exercise, which is designed to give support personnel experience in setting up a bare base environment.

"Participation in the exercise is actually a good measure of coordinating with other functions," she said. "This is the way to go in the field and to integrate it with other functions, in terms of having to negotiate things with the communications squadron, such as getting radios keyed, and the ability to deal with host nation restrictions."

Airmen involved in the Eagle Flag exercise were told they had deployed to the fictional country of "Chimaera." Upon arrival there, they found an empty field. It was the job of civil engineer troops, logistics planners and others, to turn the empty field into an operational air base.

Eagle Flag is not a civil engineer exercise, but an exercise for support personnel. It's a test tube environment where they can practice working together before they have to go out and do the real thing. Captain Horan said building the base up involves creating a plan, having the plan approved, and then working with logisticians to bring equipment and supplies into the bare base environment so that the base can be built up.

"They try to make this similar to what we might be doing in Iraq or Afghanistan, in building up a bare base," she said. "You come in to nothing and you start from scratch -- everything down to airflow, in getting the equipment in from an intermediate base, to making sure you identify what's on there, and then getting it when you need it." 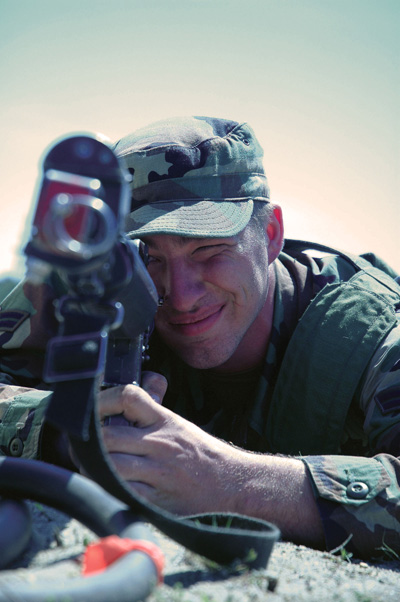 Airman 1st Class Evan Bingman, 11th Civil Engineer Squadron and "dirt boy" by trade, pulls security detail during an Eagle Flag exercise at Lakehurst Naval Air Station, N.J. Airman Bingman and nearly 30 other members of the 11th CES, participated in the exercise, which is designed to give support personnel experience in setting up a bare base environment.

During Eagle Flag, Airmen get the chance to practice what they already know, but also the chance to do other things they might be called on to do while deployed.

Senior Airman John Graham, 11th CES, is a heating, ventilation, and air conditioning specialist. He said the exercise has given him good practice for what he already knows, but has also given him new experience, as well.

"This is definitely good experience in building tents," he said. "But I also got to do part of security. I was stationed at a defensive fighting position, so I got some experience there as well."

As more equipment poured in to the fictional country of Chimaera, Graham said he would spend less time guarding the perimeter and putting up tents, and more time installing air conditioning units and similar equipment. 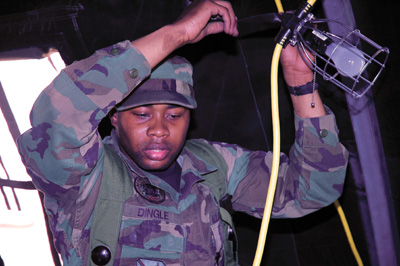 Staff Sgt. Wayne Dingle, 11th Civil Engineer Squadron, installs lighting into an Alaska Shelter tent during an Eagle Flag exercise at Lakehurst Naval Air Station, N.J. Sergeant Dingle and nearly 30 other members of the 11th CES, participated in the exercise, which is designed to give support personnel experience in setting up a bare base environment.

"We have M-80 boilers we're going to put in the shower⁄shave units," he said. "That's a deployable boiler that heats water up for when you shower, and it can also be used in deployable kitchens."

Tech. Sgt. Robert Sheipline, 11th Wing CES, said he's getting some leadership experience at Eagle Flag that he hasn't had yet.

"This thing's geared for leadership, to learn to set up a base camp," he said. "I'm hoping to get some leadership skills here. Before, I was a follower out here, being told what to do. Now I'm out here leading people. My job is to teach people how to set up the camp right, I'm here to motivate and train. But this is a learning experience -- no matter who it is, or what rank you are."

Sergeant Sheipline said he thinks there'll be about 150 tents set up on the camp. Some of those tents will be wired for electricity. There will also be mobile kitchens, generators, and "shower⁄shave" units with hot water.

Airmen from the 11th CES return to Bolling, April 27, at the conclusion of the exercise.