WASHINGTON (June 05, 2019) -- Why do nations looking for reliable international partners choose the United States? One reason is that U.S. military hardware is simply better than that of any other nation, the director of the Defense Security Cooperation Agency said.

"Our stuff is better -- it's just better," Army Lt. Gen. Charles Hooper said yesterday during a discussion of issues surrounding U.S. security cooperation at the Brookings Institution in Washington. 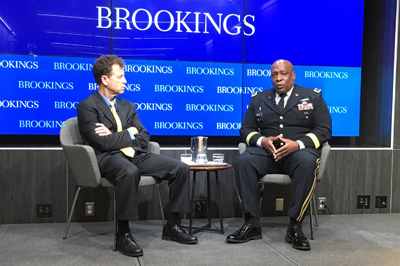 "As we know, we are in the information-based age of warfare," Hooper said. "Our equipment, our articles and services offer countries not only the best kinetics and mechanics in the world, but potential access to the information that will make them much more efficient and effective in support of our mutual interests, and also reduce the probability and possibility of civilian casualties and collateral damage."

The DSCA is responsible for executing all U.S. military security cooperation. Some of that -- foreign military sales, in particular -- is on behalf of the State Department. The agency also is responsible for helping partner nations build institutional capacity, something Hooper described as a "complement to [foreign military sales] that ensures that our partners have the human resources and the defense institutional development to properly utilize the equipment we [provide] for them in the interest of national security."

Hooper said he's aware of about 14,000 open cases of potential sales to partners across 185 countries. About half of those cases, he said, are likely to be completed in as few as 52 days.

Why would nations continue to choose the U.S., rather than other nations that might offer similar gear? One reason, Hooper said, is the U.S. commitment to its partner nations. The United States doesn't just sell gear, he said. It builds relationships with those nations when it provides them with hardware.

"Our great-power competitors have perfected the art of transactional diplomacy," the general said. "We have four values at DSCA -- the last one is commitment. The U.S. remains committed to long-term relationships. For us, the point of sale -- to paraphrase [former British Prime Minister Winston] Churchill -- is not the end. It's not even the beginning of the end. It's merely the end of the beginning."

When the U.S. sells hardware or services to partners, it is typically accompanied by long-term agreements regarding training and maintenance -- cementing a relationship, not just a sale -- Hooper said. The U.S. also maintains remarkable transparency and integrity in dealings with foreign military sales, something other potential sellers might not do, he added.

"We talk about the integrity of the U.S. process -- many stakeholders, many legal reviews, to ensure that the process remains corruption-free," Hooper said. "I tell partners and allies around the world, 'When you do business with the U.S., the books are always open.'"

Despite the aggressive nature of strategic competitors, including those looking to encroach on markets that were formerly dominated by the United States, Hooper said, he believes the U.S. will prevail.

"I am absolutely confident that we can succeed in this competition, and that we will remain the partner of choice," he said.