WASHINGTON (June 13, 2018) -- Why does the Army do what it does? To preserve equality for all Americans, and to preserve the United States -- forever, said the Army's chief of staff.

On Capitol Hill, Wednesday, Army leaders, including Secretary of the Army Mark T. Esper, Chief of Staff of the Army Gen. Mark A. Milley, and Sgt. Maj. of the Army Daniel A. Dailey met with lawmakers to toast the service's 243rd year of defending the United States from enemies both foreign and domestic. 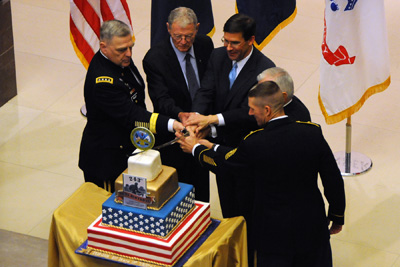 Chief of Staff of the Army Gen. Mark A. Milley, Sen. Jim Inhofe of Oklahoma, Secretary of the Army Dr. Mark T. Esper, Sen. Jack Reed of Rhode Island, and Sgt. Maj. of the Army Daniel A. Dailey use a ceremonial saber to cut an Army birthday cake, June 13, 2018, on Capitol Hill, Washington, D.C.

Before using a military sabre to ceremoniously slice into a four-tiered birthday cake, Milley posited aloud just why it is that the Army, and the uniformed men and women who voluntarily serve within its ranks, have continued to do what they do now for nearly two and a half centuries.

It's all about an idea, Milley told a crowd of Soldiers, legislators and Congressional staffers.

"We're the only military in the world that takes an oath of allegiance to an idea," he said. "An idea that's embedded within the Constitution of the United States of America."

The idea helped bring down the Nazis and the Imperial Japanese Army during World War II, he said. It also helped end communism in Europe and inspired the rise of other democratic nations around the world. And today, that idea strikes fear into the hearts of the terrorists who make up ISIS and Al Qaeda.

"It's a simple idea," Milley said. "In this country, the core organizing principle for which I and everybody in uniform is willing to die ... says that you and I are born under God, free and equal. And it is our task to make sure that that exists for all eternity, and that this nation never perishes from this Earth. That's what this Army's birthday is all about."

Esper said right now he is confident that the Army is ready to continue defending freedom both at home and abroad, if called upon to do so.

"If conflict were to happen today, anywhere in the world, there is no doubt in my mind the U.S. Army would prevail, hands down," he said. He attributed that level of readiness to Milley.

Readiness, Esper said, has been one of his top priorities since he took office in November. It's also been Milley's top priority since he assumed the role of chief of staff in August 2015.

Now, Esper said, the Army has a vision for how it can remain prepared for anything it is asked to do into the future.

The Army Vision laid out by both Esper and Milley predicts an Army that by 2028, "will be ready to deploy, fight, and win decisively against any adversary, anytime and anywhere, in a joint, multi-domain, high-intensity conflict, while simultaneously deterring others and maintaining its ability to conduct irregular warfare."

That Vision also calls for, among other things, modern manned and unmanned ground combat vehicles, aircraft, sustainment systems, and weapons, as well as "exceptional leaders and Soldiers of unmatched lethality."

"This birthday is really all about them," said Esper of those Soldiers who have defended the nation and who will continue to do so into the future. He made them, and the Americans gathered to celebrate the Army's birthday a promise.

"I guarantee you that wherever we are going now, the path that we are set on is outlined in the vision that the chief and I put out just two weeks ago," Esper said. "Our country, our Army, will prevail in the future, in the next ten years, and we will prevail for the next 243 years as well."