The two-week exercise is meant to gather feedback from Soldiers on the performance of new warfighting capabilities like robotics systems and autonomous weapons systems in a life-like combat situation, according to Maj. Gen. Terry McKenrick, commander of the Army's Brigade Modernization Command. 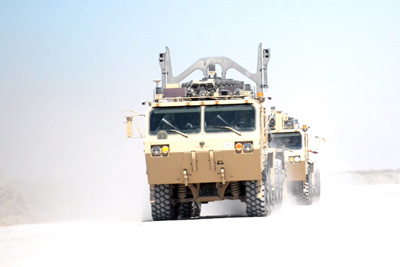 At Fort Bliss, Texas, Oct. 14, 2016, one tactical vehicle, with a driver, is followed automatically by another, without input from the passenger behind the wheel. The "leader-follower" vehicle concept is being evaluated during the Army Warfighter Assessment 17.1 at Fort Bliss. In practice, multiple vehicles in a convoy could be controlled by only one vehicle, the lead vehicle, while the follow-on vehicles remain driverless. Without the need for those additional drivers, there would be fewer Soldiers involved in the convoy and less risk of loss of life in the event the convoy is attacked.

"How well do these capabilities perform?" he said during a media day Friday, describing the questions the AWA is intended to answer. "Do they meet the requirements? Are the requirements right? Is there a way to make this capability better?"

Participants in AWA 17.1 include Soldiers from the regular Army, Army National Guard, and Army Reserve, as well as soldiers from the United Kingdom, Australia, Canada, Denmark and Italy.

During the AWA, Soldiers will implement 41 concepts and capabilities designed to meet 20 "warfighting challenges" posited by the Army. The exercise will be stopped three times so the Soldiers can provide insight on how the new capabilities helped or hindered the execution of their mission.

McKenrick said the feedback will be analyzed by the Brigade Modernization Command.

"We determine some findings and recommendations; we then brief that through a series of governance forms, and then it goes up to the Department of the Army, where senior leaders ... can prioritize and make decisions," he said.

In some cases, the new capabilities will be fielded to the Army; in others, improvements will be called for; and in still others, the capability will be judged ineffective or incapable of meeting the capability gap for which it was designed.

Capabilities being assessed at AWA 17.1 include unmanned aerial systems, including the micro UAS, a "leader-follower" capability that is meant to increase the safety of convoy operations by limiting the number of drivers needed for vehicles.

The Army defines the 20 "warfighting challenges" that new capabilities like the micro UAS are meant to answer as "enduring first-order problems, the solutions to which [will] improve the combat effectiveness of the current and future force."

"We vet every concept and capability for [Network Integration Evaluations and AWAs] against those warfighting challenges, making sure we're focused on solving the highest priority problems and gaps affecting our Army," McKenrick said.

In the past, the Army conducted an array of NIEs, 11 in all, at a rate of two per year. Such evaluations are meant to determine how well equipment works within the existing Army network.

That's not the goal of the AWA, McKenrick said. Its purpose is to examine how new concepts and capabilities integrate into the war fight, rather than whether equipment works on the Army network.

The AWA is meant to further develop interoperability in a joint, inter-organizational, and multinational environment -- one of the 20 warfighting challenges.

The AWA 17.1 is the first AWA, which is being held this year instead of an NIE. According to McKenrick, the Army will host one AWA and one NIE each year, in lieu of two NIEs a year.