New directive: officers must be vetted before promotions are confirmed

WASHINGTON (Aug. 23, 2016) -- A change to Army regulations now requires that the Army determine the suitability of each officer considered for promotion before that officer's name ever crosses the desk of the Army secretary.

While the Army has always investigated officers to ensure they are suitable for promotion, in the past such vetting usually took place at the same time that senior Army, Defense and congressional leadership were considering them, rather than before. 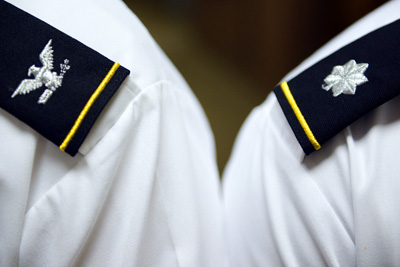 A new change to Army regulations ensures that officers selected by boards for promotion meet the standards for exemplary conduct laid out in U.S. law, before their names are forwarded to the Secretary of the Army.

Now, the directive published Thursday, July 18, requires that officers who are selected for promotion be vetted for mental, physical, moral, and professional fitness and meet the standards for exemplary conduct before their names are forwarded to the secretary of the Army for certification.

The previous concurrent vetting process sometimes resulted in the Army having to remove officers from promotion lists, resulting in embarrassment for the individual and the service.

"Previously, the Army did not systematically screen all officers recommended for promotion or federal recognition for adverse or reportable information prior to nomination or confirmation," said Albert S. Eggerton, chief of Officer Selection Board Policy.

"Consequently, some officers confirmed by the Senate were not discovered to have adverse or reportable information until just prior to appointment."

According to Army Directive 2016-26, "a post-board screening initiated by the director of Military Personnel Management will be conducted on officers selected for promotion to captain through colonel and CW3 through CW5 before the results of the promotion selection board are forwarded to the secretary of the Army."

The post-board screening includes a review of information in official files maintained by the Army Criminal Investigation Command, the Department of the Army inspector general, the restricted portion of the Army Military Human Resource Record, and a query for suspension of favorable personnel actions.

"Adverse information" can include, among other things, SHARP-related offenses; domestic assault or child abuse; DUIs/DWIs; possession or involvement with child pornography; positive urinalysis; false swearing; patterns of misconduct; or ongoing investigations or cases under review with Criminal Investigation Command, the Department of the Army, the Inspector General, or their unit.

Similar changes have been made for officers who are being considered for promotion to first lieutenant or chief warrant officer.