PHILADELPHIA (June 13, 2016) -- Following a fairly long day meeting with veterans and Junior Reserve Officer Training Corps cadets in "America's home town," the undersecretary of the Army and the sergeant major of the Army burned off some calories with a run up the "Rocky Steps" in front of the Philadelphia Museum of Art -- ala Rocky Balboa in the 1976 film "Rocky."

The two started off their day in Philadelphia with a visit to the Delaware Valley Veterans' Home just north of the city. Afterward, with a police escort, the two made their way to the First Troop Philadelphia City Cavalry armory in the city. There they met with more than 100 Junior Reserve Officer Training Corps cadets from the Philadelphia Military Academy. 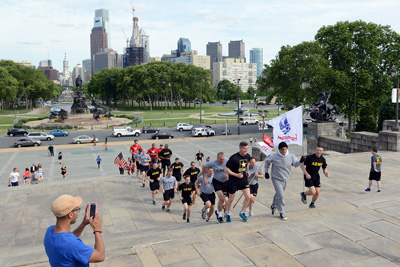 Under Secretary of the Army Patrick J. Murphy and Sgt. Maj. of the Army Daniel A. Dailey lead a team of more than a dozen Soldiers up the "Rocky Steps" in front of the Philadelphia Museum of Art, June 13, 2016, in advance of the Army's 241st birthday.

Afterward, the two donned physical training gear and ran more than a mile and a half to the nearby Philadelphia Museum of Art to run up the 72 stone steps there to the museum's entrance. The two were accompanied by an entourage of military personnel, also in PT gear.

At the museum, dozens of others, young and old, local and tourist, were also running the steps, recreating for themselves the workout of boxer "Rocky Balboa," portrayed by Sylvester Stallone in six of the "Rocky" films, including the original. 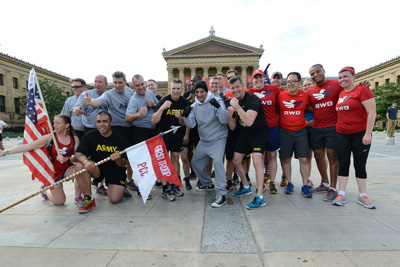 Under Secretary of the Army Patrick J. Murphy and Sgt. Maj. of the Army Daniel A. Dailey pose with Soldiers after running up the "Rocky Steps" in front of the Philadelphia Museum of Art, June 13, 2016, in advance of the Army's 241st birthday.

"This is how the undersecretary and I are earning our cake today, in preparation for tomorrow, the Army's birthday," said Sgt. Maj. of the Army Daniel A. Dailey, after reaching the summit of the steps. "And we are doing it in America's hometown, Philadelphia, PA."

Under Secretary of the Army Patrick J. Murphy, who joined Dailey in the run said, "it's all about readiness, individual readiness ... and all about making sure we are ready to fight tonight. Thanks for being part of America's varsity team, the U.S. Army, and God bless all of you at home."

Afterward, the two, with more than a dozen other Soldiers in tow, ran back to the armory. The crew carried with them an American flag.