WASHINGTON (June 05, 2016) -- Where do new Army officers come from? They come from the U.S. Military Academy at West Point, New York; Officer Candidate School; and, for a century now, the Reserve Officer Training Corps.

The ROTC program was established by Congress, June 3, 1916. Today, after 100 years of providing officers to lead America's Army, it is responsible for providing some 70 percent of new lieutenants to the Regular Army, Army National Guard and Army Reserve -- about 5,300 new officers each year in total to the Army. The Army's ROTC program also produces officers for the Navy, Marine Corps and Air Force as well. 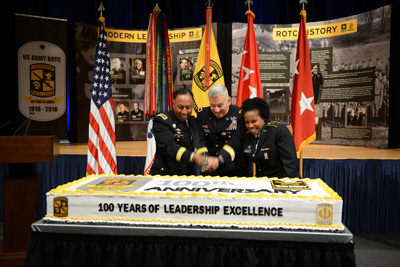 Army senior leaders, including Under Secretary of the Army Patrick J. Murphy; Gen. Dennis L. Via, commander of Army Materiel Command; and Maj. Gen. Christopher P. Hughes, commanding general of Cadet Command -- all graduates of the ROTC program -- attended a commemoration event, June 3 at the Pentagon, to recognize the 100th anniversary of the program.

"ROTC is the largest producer of U.S. military officers in the United States," Hughes said. "In fact, since its inception in 1916, ROTC has produced over one million officers for our military. At the end of 1918, ROTC produced its first 103 commissioned officers, and produces more than 7,500 total, across the services, every year -- men and women who have chosen to serve our nation, as our leaders, for the Army, the Marine Corps, the Navy and the Air Force."

Today, ROTC has programs at over 300 universities and campuses across the country, Hughes said. Many of those schools also offer their program to nearby college campuses who are unable to host their own program. So the total footprint for campuses served by an Army ROTC program exceeds 1,000.

"Each of these programs strives to recruit the best possible cadets to lead our armed forces, and to that end, ROTC has become our nation's largest grantor of scholarships at our universities," Hughes said. "They award more than $431 million each year to roughly 23,700 cadets, putting young men and women on a pathway to advanced education at top-tier colleges and universities around the country, while volunteering to serve a cause greater than themselves: to serve their nation as leaders in one of the noblest professions in our country -- that of the U.S. military."

Gen. Dennis L. Via, a 1980 graduate of the ROTC program at Virginia State University, said it was ROTC that opened his eyes to the possibilities that available to him in the U.S. Army.

"Virginia State introduced me, a small country boy, to a world of endless possibilities," he said. "But it was ROTC that opened that door to the new world. When I reflect back on those days, I often think of the huge difference ROTC made in my life, and the difference ROTC has made in the lives of thousands of other former cadets like me, throughout their careers.

"Today, when I visit universities and ROTC battalions across the nation, I am so very proud to see how the program and the cadets are woven into the very fabric of the campus communities. The young men and women who have passed through our ROTC battalions over the last 100 years have benefited greatly from the leadership, discipline, structure and positive environment that the program provides."

In addition to creating new officers, Via said that the ROTC program is also partly responsible for creating the diversity that's now seen in the Army.

"They have led the way for diversity and inclusion in our force," he said. "The Army that we have all come to know today would not exist as it does without the college and university ROTC program."

While the future of conflict is uncertain, Via said, he's confident that the ROTC program will continue to provide officers that are well-prepared to lead America's Army.

"I can say with full confidence that with the enduring excellence of the ROTC program, our armed forces will continue to be the best-trained and best-equipped and certainly the best-led fighting force in the world."

At the Pentagon event were some of those future officers, now in the ROTC program, including ROTC Cadet Staff Sergeant Charles Derrick and ROTC Cadet Private Michael Wong -- both students at George Washington University in Washington, D.C.

Derrick, who studies international affairs and geographic information systems, said he plans to accept a commission into the National Guard -- something his grandfather had done before him. His service, he said, will bridge his professional and personal goals.

The ROTC program, he said, is "sort of a segue between my professional aspirations and the things I care about. Helping people is something that's important to me, and this was really a way that could materialize."

Wong, who studies economics and international affairs, said he's competing for a commission in the Regular Army -- he wants to go active duty as an armor officer, or possibly military intelligence or engineer.

For him, ROTC lets him attend a prestigious civilian university, with the end goal of serving his country.

"ROTC presented the unique opportunity to study as a civilian, but also train as a future military officer, with the hopeful aspiration to serve my country in the greatest honor possible: being an officer in the U.S. Army," Wong said.

At the ceremony at the Pentagon, hundreds of Army officers attended -- and the room was filled also with cadets and mid-shipmen now in the ROTC program. Derrick said he was impressed by the attendance.

"It's cool to see all this support and all the people willing to come out," Derrick said. "It speaks a lot to the program and what it provides to the country."