NASHVILLE, Tenn. (March 31, 2015) -- The Army often has the best equipment available, but considering the fiscal environment, such gear may not continue to be the best value, one of the Army's leading aviators said.

During the 2015 Army Aviation Association of America summit, in Nashville, Tennessee, March 30, Maj. Gen. Michael D. Lundy, commander of the U.S. Army Aviation Center of Excellence and Fort Rucker, said it is not always necessary for every piece of gear the Army buys to be the absolute best available. He also said it is no longer affordable. 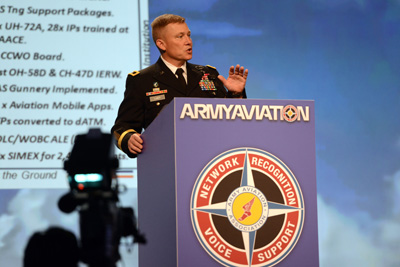 Maj. Gen. Michael D. Lundy, commander of the U.S. Army Aviation Center of Excellence and Fort Rucker, said it is not always necessary for every piece of gear the Army buys to be the absolute best available. Lundy delivered his remarks during the 2015 Army Aviation Association of America summit in Nashville, Tenn., March 30, 2015.

Lundy spoke before an audience of more than 1,000 Army aviators and industry representatives - the very people who define the Army's equipment requirements and who turn those requirements into equipment.

Lundy also called for more simplicity in Army gear, as one way to reduce the training burden on the force.

"We have to move the complexity behind the faceplate," Lundy said. He cited one piece of gear with which he's familiar - the Advanced Special Improvement Program model SINCGARS radio - as being overly complex.

It "has too many buttons on the front of it," he said. "I want the O-N/O-F-F option. Just a toggle switch would be nice."

"We are forcing our aviators and our Soldiers to learn too much technical stuff," he said. "We need the machines to do some of this, so we can use your help out there."

Lundy also pointed out that while unmanned aerial systems are firmly rooted in Army aviation - they are not going anywhere - in many cases, the term "unmanned" is misleading.

"I will tell you, our unmanned formations are bigger than our manned formations," Lundy said. "For everybody developing unmanned stuff, we need you to 'unman' your unmanned stuff. It takes too many Soldiers to operate this stuff, to maintain it. They are great capabilities. As we think to the future, this is what I need you to think about: our Army will have fewer Soldiers. Every time we have a new piece of equipment, if it takes some sort of specialization, that's not a good piece of equipment."

Lundy also spoke about the Aviation Restructure Initiative, and how the effort will help close capability gaps in Army aviation. One such area, he said, involves the inability of the Army to fly and fight in all environments.

"We don't have the power we need," Lundy said. A fix for that is the Army's Improved Turbine Engine Program, or ITEP, which is meant to be a "drop-in" replacement for engines on the AH-64 Apache and UH-60 Black Hawk aircraft.

The ITEP is expected to provide increased range, horsepower, fuel efficiency, and engine life. It is also expected to allow those aircraft to provide lift at higher altitudes and in hotter environments.

Lundy also cited as a gap the communications capability between ground Soldiers and aviators.

"Our network is not fully tailored for air/ground operations capability," he said.

The Army's network has grown, he said, "but it has grown apart from Army aviation. We are fixing that. We are accelerating getting after Soldier Radio Waveform - that is what our Soldiers are using on the ground right now ... so we can rejoin the air-ground team."

He also said the Army is looking at mid-tier network capability and accelerating all that as well.

Lundy told attendees the Army is looking to improve its ability to operate in degraded visual environments. He said the Army has a lot of that capability already, and must not wait to use it where it is needed most.

"If we are going to maintain overmatch and truly be game-changing, we have to be able to fly and fight no matter what the weather, no matter what the visual conditions are," Lundy said. "We have to get after the degraded visual environment capability soon. That is going to give us an advantage no other nation has."

Lundy said the Army is aiming funds at development of those capabilities, and said they should not be limited to aviation alone. What enables aircraft to operate in degraded visual environments should also be made available to tanks and other ground vehicles.