Secretary of the Army John M. McHugh addressed the more than 1,000 Soldiers and family members in attendance at the 2014 Army Birthday Ball here, Saturday, held as the capstone event on a week of celebration coinciding with the Army's 239th birthday, which is June 14. 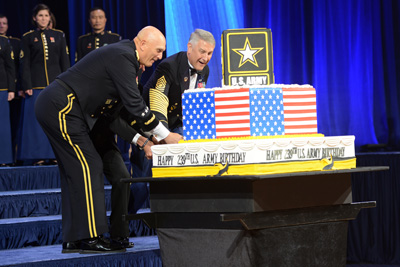 Chief of Staff of the Army Gen. Ray Odierno, Secretary of the Army John M. McHugh (obscured in the center), and Sgt. Maj. of the Army Raymond F. Chandler III, cut the birthday cake during the 2014 Army Birthday Ball, June 21, 2014, at National Harbor, Md.

"Every member of our Army family, each and every one of you, has helped write the 239-year history of this truly amazing force -- a history that at this very moment is still being written here at home, in Afghanistan, and in more than 100 nations across the globe," McHugh said. "Make no mistake about it -- each and every one of you are part of that long legacy of service -- defending our nation, and our ideals and living every day the Army values."

At the Gaylord National Resort and Convention Center at National Harbor, Maryland, just a short drive from the Pentagon, Soldiers and their families celebrated 239 years of Army history and sacrifice -- something they don't do often enough, the service's chief of staff said.

"This is a day for us to celebrate who we are, to celebrate this great Army of ours," said Chief of Staff of the Army Gen. Ray Odierno. "One of the things we don't do very well in the Army is really talk much about ourselves. We just go about our business."

From the crowd, a solitary Soldier acknowledged the truth of his observation with an affirmative "hooah."

"What does our talking? All we have to do is look at the colors -- 187 battle streamers, earned by millions of men and women throughout this nation's history. That's who we are," Odierno said.

The U.S. Army began June 14, 1775 -- 239 years ago -- with the formation of the Continental Army. That Army was meant to support the American Revolution.

"We started out as a volunteer force back in 1775. And today we remain a volunteer force, despite all that has gone on in between," the general said. "And that is what tonight is about. It's about remembering who we are."

Odierno highlighted several key conflicts -- each of which has a corresponding streamer on the Army flag -- that he believes best represents what it means to be a Soldier. Included in those, he said, are the Revolutionary War, the War of 1812, the U.S. Civil War, and World War I.

"And then again, as we were reminded just a few weeks ago, the great men and women who sacrificed all, when the basic freedoms of everyone in the world were being challenged -- who were willing to raise their right hand and swear that oath to the Constitution of the United States," he said. 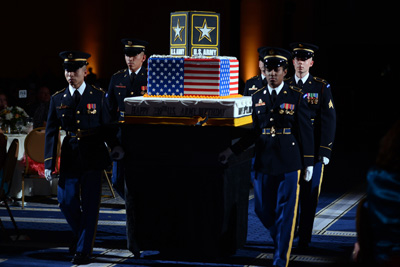 Soldiers with the 3d U.S. Infantry Regiment (The Old Guard), bring in the birthday cake during the 2014 Army Birthday Ball, June 21, 2014, at National Harbor, Md.

Odierno was alluding to World War II. Recently, on June 6, nations convened in Normandy, France, to commemorate the 70th anniversary of the D-Day invasion by allied forces onto the beaches there.

Today, Odierno said, there are some 70,000 Soldiers deployed around the world, still fighting, defending the United States and its interests.

"They do it with little fanfare," he said. "They do it because that is what is needed to sustain our freedom. That's who we are. We are a group of Soldiers who support this nation and who believe in the values of this country. That is what we are here to celebrate tonight."

American Soldiers today, he said, are in the mountains of Afghanistan, in Kosovo, and in Africa training the militaries of partner countries.

"We have special operations forces operating around the world, preparing to deploy back to Iraq," he said. "We have Soldiers in Honduras, conducting operations in Central America. We have Soldiers assuring our allies in Eastern Europe. Their presence makes a difference. We do our work quietly, but we do it to protect this great nation."

This year's Army birthday celebration included all the trappings of any celebration: song, dance, entertainment, fine dining, and even a cake. The Army's three senior leaders together made the first symbolic cut into that cake with a military sabre.

Before that happened, however, Sgt. Maj. of the Army Raymond F. Chandler III made it clear that there are many who could not make it to the celebration -- some, because they are deployed and are now in combat. Others, he said, because they had been killed in combat.

"Tonight, unfortunately, many folks will not be able to participate as part of our Army birthday," he said. "We need to remind ourselves that their sacrifice is part of what sustains us, not only today, but into the future.

"It's the American Soldier that sustains this nation and sustains this Army," Chandler said. "And regardless of what component you may serve in, together as a team, we continue to defend and support the Constitution of the United States against all enemies foreign and domestic. And if that doesn't fill you with pride, if that doesn't fill you with a sense of being a part of an Army profession -- I don't know what does."