WASHINGTON (Feb. 21, 2014) -- As the Department of Defense embarks on "Military Saves Week," Feb. 24 through March 1, the Army wants Soldiers, civilians and their families to know that year-round it provides financial education -- including information on how to save -- at installations across the force.

As part of "Military Saves Week 2014," service members and their families can point their web browser to militarysaves.org to take the pledge to save money. This is the eighth year of Military Saves Week, which is cosponsored by the Consumer Federation of America. The week focuses on helping military families learn to save money, and to ensure they have the tools needed to reduce their debt and save for the future. 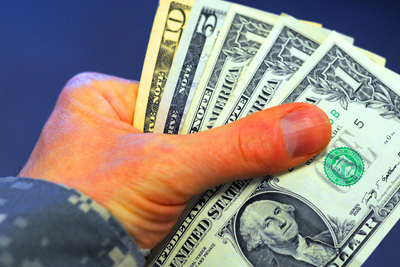 As the Department of Defense embarks on "Military Saves Week," Feb. 24 through March 1, the Army wants Soldiers and their families to know that year-round it provides financial education -- including information on how to save -- at installations across the force.

"It's a social campaign where we collaborate with the Office of the Secretary of Defense and our Military Saves partners, under the umbrella of America Saves. The intent is to get folks to save as much as possible. The Army had the most pledgers last year," said Gale Johnson, financial readiness and Army Emergency Relief program manager at Installation Management Command.

Johnson said service members, civilians and family member finances are keys to successful service and enjoying a satisfactory lifestyle while in the Army.

She said that while there is a focus on saving and financial awareness especially during Military Saves week, the Army offers financial training to Soldiers, civilians and their families year-round.

The Army also provides mandatory training to Soldiers throughout their careers, beginning with initial entry training. That training spans an array of financial topics, to insure that Soldiers and their families are financially literate and are able to build budgets for their families now, and plan for their future.

Financial readiness is one component of Soldier and Army readiness, said Michael A. Wood, chief of transition support services at U. S. Army Installation Management Command, or IMCOM. He said when a Soldier has his or her finances in order, that translates to increased personal readiness. And that means increased mission readiness for the Army and increased personal satisfaction for service and family members.

"If a Soldier doesn't have to worry about their finances, that's one less thing to think about as they go downrange to deploy, while they build an Army career," he said. "If you are financially secure, you will be more resilient and more ready to help defend the country."

Through Army Community Services, or ACS, IMCOM provides personal financial managers to Soldiers, civilians and their families to counsel, train, and mentor them on the financial issues and challenges that life brings, Wood said.

Those programs begin as early as basic training. There, Soldiers get about 2.5 hours of mandatory training on military pay issues and banking and financial services, said Johnson.

After Soldiers leave basic training, they get an additional 8 hours of mandatory financial education during advanced individual training.

That additional classroom experience covers a much wider array of issues. There is further development of the limited basic information they got in basic training, plus additional material on developing a spending plan, managing credit, buying a car, insurance, investments and savings, saving for college, retirement planning and consumer awareness. That last subject delves into such things as predatory lending, to include pay day loans, for instance.

"The first thing we teach is establishing a spending plan," Wood said. "We try to build everything around a spending plan. When a family has an effective spending plan in place, they know what their income and assets are, and what their money left over at the end of the month will look like."

And the Army goes further. The ACS program offers advice and assistance on an even larger array of topics that Soldiers and their families can seek out on their own. In 2012, financial readiness providers within ACS fielded 585,000 queries on issues ranging from credit counseling to the Thrift Savings Plan. Those were just simple queries. The ACS maintains a database of such contacts.

Overall in 2012, the ACS fielded more than a million queries from Soldiers that could have been resolved in as little as 15 minutes, or could have taken hours or days to resolve.

And the ACS also offers voluntary classes, financial education coursework outside the mandatory coursework required in basic military training and advanced individual training. In 2012, the ACS provided courses to more than 387,000 Soldiers, civilians and retirees on subjects from credit report reviews to predatory lending.

"What we are trying to establish with Soldiers, civilians and their family members is a basis of financial stability leading to financial resiliency," Johnson said. "Keeping with the theme of OSD, our motto is 'financial readiness equals mission readiness.' We want to create the link to ensure we have a connection."

Soldiers can come from all kinds of backgrounds, Wood said, and the Army can't make a prediction about what Soldiers know when they come in -- only that it wants all its Soldiers to be financially literate, because being financially stable is important to unit readiness, military readiness, and their personal safety.

Wood said in terms of financial literacy, "In our opinion, it doesn't matter how much you have or how much you make, it is what you do with it. We give them the tools to establish a plan for their military career.

"We assume an 18-year-old is often most of the time not very savvy in terms of finances and investing. We'll take them through those basics, giving them the needed tools and resources to build them some protection as they have established a firm baseline."

Later, Wood said, as a Soldier moves through his or her career, the Army provides additional financial education that helps Soldiers understand how to buy a home, build an adequate "nest egg," save for an emergency fund, and prepare for retirement.

Soldiers getting into financial trouble with predatory lenders "has been a problem for us since the beginning of time," Johnson said. Predatory lenders could include debt to payday lenders, car title loans, or rental companies.

Wood said the only difference between civilians and the military when it comes to predatory lenders is that service members are targets because predatory lenders know they have stable jobs. But other than that, he said, "all the same loopholes and pitfalls are around installations that you are going to see in any small community."

When Soldiers get in financial trouble they could opt to request assistance from AER, said Wood. AER is usually located within the ACS and is the Army's own emergency financial assistance organization. They are dedicated to helping the Army take care of their own. Another option is to approach ACS for assistance.

"We'll set up payment plans with the bank," Wood said. "We'll let them know the Soldier is unable to pay that full balance and we would like to set up a payment plan that would last six months to a year, paying a minimum payment, and asking them to waive the interest. And most of the time, almost all of the time, the banks would be willing to work with you on that."

The majority of banks and credit unions on Army installations get involved and encourage their communities to get involved with Military Saves.

Participants in Military Saves on Army posts fill out a pledge card, which can be picked up at the on-post financial institutions or at ACS, indicating their commitment to save. The physical card helps Soldiers remember their promise to themselves and to their financial health.

During Military Saves Week, the on-post banks and credit unions gives incentives to Soldiers, civilians and their families. Such incentives include waiving minimum balance on savings accounts for a year, higher interest earnings for a certain time periods, and small monthly requirements to maintain their accounts. That allows Soldiers to start off small and work their way up to their goal.

Banks and credit unions on post also offer financial education to Soldiers, in partnership with ACS. They offer basic financial education for debt management, checkbook maintenance, investing, and retirement planning. They sometimes do that through ACS or through other avenues.

On-post banks and credit unions take those incentives even further. They continue to promote financial readiness and health through the unique services they provide for the Army posts. Some of the services also include small dollar loans with low interest rates, pre-deployment briefings for Soldiers, civilians and family members, rebates on ATM fees and even on credit cards. These extra incentives add additional motivation for them to be financially healthy by putting those extra savings into their accounts.

Military Saves Week, runs Feb. 24 through March 1. More information on the program is available at militarysaves.org or at installation Army Community Service centers.