WASHINGTON (Sept. 13, 2013) -- The Army expects to have embedded behavioral health teams on Army installations and in all active brigade combat teams no later than fiscal year 2016.

Speaking before the 2013 Warrior-Family Symposium, Sept. 12, in Washington, D.C., Vice Chief of Staff of the Army Gen. John F. Campbell briefly laid out some of the Army's efforts to bolster resilience in Soldiers and strengthen its behavioral health programs for service members and their families. 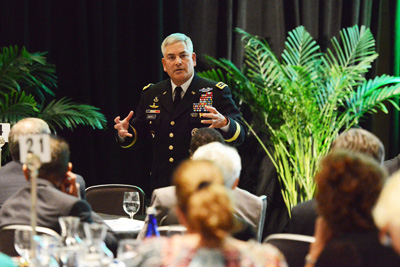 Vice Chief of Staff of the Army Gen. John F. Campbell briefly laid out some of the Army's efforts to bolster resilience in Soldiers and strengthen its behavioral health programs during the 2013 Warrior-Family Symposium, Sept. 12, 2013, in Washington, D.C.

Campbell said the Army is focused now on an effort to "standardize, integrate, and centralize" the tracking of its behavioral health programs and behavioral health patients. To do so, they have created what he calls the "behavioral health service line." That includes six lines of effort, which he explained to the several hundred attendees of the day-long symposium.

Second, there is also a "behavioral health data portal," which Campbell said tracks patient outcomes, satisfaction and risk factors via a web application. "It enables improved assessment of program and treatment efficacy."

The portal is currently being implemented at all behavioral health centers and clinics, as well as at Army Medical Command.

The Army's Child and Family Behavioral Health Services provides care to spouses and children where they live, through school programs, along with child and family assistance centers. It also includes the integration of behavioral health providers into primary care clinics.

Family advocacy programs, he said, provide Soldiers training, support and "tools to establish a climate within their families that foster resilience and trust, to eliminate abuse and neglect," Campbell said.

Campbell also discussed the Army's efforts to treat post-traumatic stress disorder and traumatic brain injury, known as TBI; injuries that have become associated with 12 years of war in Afghanistan and Iraq.

"We've made great progress ... to ensure that Army and all Department of Defense personnel that have potentially been involved in concussive events are properly evaluated, treated and tracked," Campbell said.

To better detect possible TBI, Soldiers are equipped now in theater with three "blast gauges" that can detect their exposure to a concussive event, Campbell said. Vehicles are also being equipped with blast gauges.

Campbell said a partnership with the Intrepid Fallen Heroes Fund produced the National Intrepid Center of Excellence at Walter Reed National Military Medical Center. That is now being expanded to nine satellite centers across the country -- seven for the Army, and two for the Marine Corps.

On Sept. 11, the first of those satellite centers, called "Intrepid Spirit 1," opened at Fort Belvoir, Va.

"These centers increase access to quality interdisciplinary care for our Soldiers and family members," he said. "Their proximity to where the warriors live allows patients to leverage love and support of the families that are tied into this process -- the healing process. It gives them the access to the latest research."

Army efforts into behavioral health are part of an overarching program called the Ready and Resilient Campaign, a "top priority" for Campbell, which he said is meant to "establish an enduring cultural change within our Army, starting with our Solders, but it has to include our families, and has to include our great Department of the Army civilians."

"It integrates resilience into how we build, strengthen, maintain, and access total fitness, individual performance, and more importantly unit readiness," he continued. "Our goal is to create an Army culture that embraces resiliency as part of our profession."