WASHINGTON (June 25, 2013) -- The Army announced June 25 that 10 brigade combat teams based in the United States are slated to be reorganized by the end of fiscal year 2017.

In addition to the 10 brigade combat teams, known as BCTs, announced today, the Army also announced last year it would cut two brigades in Germany that complete inactivation this fiscal year. These changes will reduce the number of BCTs in the Army from 45 to 33. 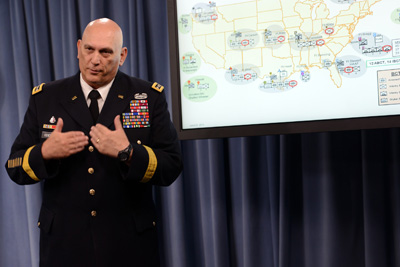 Chief of Staff of the Army Gen. Ray Odierno announced, June 25, 2013, that 10 brigade combat teams based in the United States are slated to be reorganized by the end of fiscal year 2017. The move will reduce the number of BCTs in the Army from 45 to 33.

"Based on extensive analysis, the lessons of twelve years of war and the need to increase the Army's operational capability and flexibility, the Army is reorganizing our brigade combat teams to reduce the number of headquarters while sustaining as much combat capability as possible," said Chief of Staff of the Army Gen. Ray Odierno during a press conference at the Pentagon. "In other words, we are increasing our tooth-to-tail ratio."

It is expected that at a later date, the name of an additional BCT will be announced that will also be reorganized, Odierno said. When that happens, it will bring the total number of remaining BCTs in the Army down to 32.

While the number of BCTs will be reduced, the size of remaining BCTs will increase, on average, to about 4,500 Soldiers. That will be accomplished, in many cases, by moving assets from existing BCTs into other brigades.

"We will reinvest some of the Soldiers, equipment and support personnel into the remaining BCTs," Odierno said.

The Army's decision to cut those 10 BCTs involved "extensive BCT analysis that included over 6,500 hours of simulated combat in 34 separate scenarios and extensive interviews with our commanders," Odierno said. "We also conducted a programmatic environmental analysis that looked at both the environmental and socio-economic impacts. Additionally, we conducted listening sessions at 30 installations with Soldiers, families, local leaders and the business community to better understand the impacts of all potential decisions."

The general also said the Army saved nearly $400 million in military construction dollars by putting projects on hold until the final decisions were made about which brigades to reorganize.

While 10 BCTs will be eliminated from the Army, some of the components from those brigades will be put into remaining BCTs. In particular, Odierno said, a third maneuver battalion, and additional engineer and fires capabilities will be added to each armor and infantry brigade combat team.

"We will also increase the fires capability," Murray said. "Specifically, we'll go from a 2x8-gun fires battalion to a 3x6. So two additional guns, one additional battery to support the three maneuver battalions. And then in order to do that, some of the echelon-above-brigade structure in terms of engineers will have to be reorganized to provide that additional engineering capability to the BCT."

Stryker brigades, Murray said, currently have three maneuver battalions, but no brigade support troops battalion. Those brigades will get a brigade engineer battalion.

Vice Chief of Staff of the Army Gen. John F. Campbell said that the changes to the brigades make the remaining BCTs more capable.

"We had the ability to make the brigades more capable," he said. "We are getting rid of a lot of the headquarters, the 0-6 headquarters. So the tooth to tail goes down."

Campbell said that some Soldiers will need to move as part of the changes. But for the most part, moves will be from one unit on an installation to another.

"A majority of that will stay on that post," Campbell said. "But we will have to add some, (in) some places. Some will have to move."

With the expected cuts in BCTs, the Army will be left with a mix of 12 armored BCTs, 14 infantry BCTs, and seven Stryker BCTs. Those numbers could change in the future. Campbell said he feels confident that the brigades identified already would be the ones to be "reorganized." But if the Army finds, in the future, that it needs a different mix of brigades than what has already been identified -- some existing brigades might instead be changed to meet the new requirements.

Brigades marked for reorganization include:

The Army is currently planning to reduce its end strength to 490,000 Soldiers by the end of fiscal year 2017.