WASHINGTON (Nov. 28, 2012) -- The children of military families sat patiently in the front row of seats set up in the East Room of the White House, Nov. 28, to listen to remarks by Michelle Obama.

"Our military families truly represent the very best that this country has to offer, and I've seen it up close," Mrs. Obama said. "You all do so much for this country, and you do it with such amazing poise and grace." 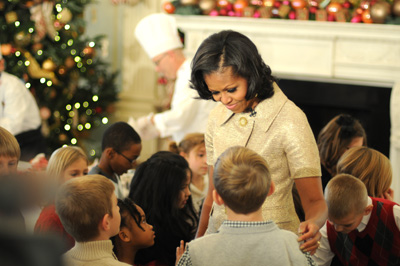 Behind the children, the East Room was filled with military families.

To illustrate her point about the sacrifices of military children, she asked for one of the children to volunteer how many times they have had to change schools. One child, only 10 years old, had changed schools four times.

"Four schools at 10 years old -- that is typical," Mrs. Obama said. "You meet these kids and they've been to so many schools and they are adjusting and keeping their grades up. And so many of you step up and handle your business while mom or dad is away, right? I just want you all to know just how proud we are. We are so proud of you, and we think you are amazing individuals. It may not feel that way, but you are special. We are grateful for your sacrifice and your service."

In the few days following the Thanksgiving holiday, volunteers from around the country descended on the White House to help decorate the first family's home for the Christmas season.

Included in those decorations, the first lady said, are 54 trees, including the "official" White House tree, which is 19 feet tall. This year, that tree bears the words "Joining Forces" and is decorated with ornaments made by the children of military families from around the globe, Mrs. Obama said.

Another tree in the White House, she said, "honors our men and women in uniform for the extraordinary sacrifice they and their families have made." That tree is decorated with gold stars bearing the names of those who have died in service to the country.

"Any Gold Star family who visits the White House during this season will have the opportunity to decorate their own ornament and hang it on that very tree for the holiday period in honor of their loved ones," Mrs. Obama said.

Included among the 85 volunteers from around the United States who came to the White House to help decorate was Jennifer Jackman, mother of Marine Corps 1st Lt. Ryan M. Jackman. He died in training, March 2007, near Camp Pendleton, Calif.

This is Jackman's second year as a decorator at the White House.

"Last year I was invited to be the Gold Star representative on the decorating team," she said. "This year I applied just like any other American and got selected. I came to support the cause. I love volunteering. That's what Gold Star mothers do. We volunteer to honor our sons and daughters; and what better opportunity than to volunteer to decorate the White House."

Jackman said she's the only Gold Star mother on the volunteer decorating committee, but said there are also Blue Star mothers included as well. She said the decorators come "from every walk of life," and are all volunteers, like her.

"I've had the opportunity to educate my fellow volunteers on what we do following the deaths of our sons and daughters, which is give back to our country," Jackman said.

Concluding her remarks, Mrs. Obama expressed holiday wishes for the families that had gathered.

"I do hope that your holiday season is truly special; that you really use this time to reflect, to come together," she said. "So many of us in this country will use your lives as inspiration as we sit around our trees and our tables and we think about all that we have and all that all of you are sacrificing to make sure we live in freedom and harmony. We are truly grateful."

As Mrs. Obama left the East Room, she was flanked on all sides by a crowd of tiny children. She led them to the State Dining Room, on the other side of the White House, where she worked with them to make holiday decorations and decorate treats.