WASHINGTON (April 24, 2012) -- Four Soldiers who built a training device to teach service members to safely exit an overturned Humvee were among 22 troops and civilians honored April 24 as part of the 2012 Secretary of the Army Awards.

Under Secretary of the Army Joseph W. Westphal hosted the ceremony at the Pentagon and told attendees that the "tools of innovation," which include creativity and design, are key to America's "ability to win wars, to shape the environment and to deter aggression." 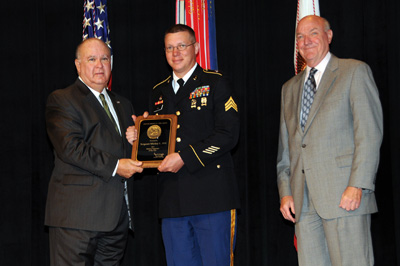 Winners were chosen in categories including diversity and leadership, small and disadvantaged business utilization, editing and publications, exceptional civilian service and "suggester of the year."

The Secretary of the Army awards program bestows upon Army civilians and Soldiers alike, recognition from the service's secretary, John M. McHugh. While the Army's undersecretary presented the awards, McHugh spelled out in an official letter regarding the program, the importance of the contributions of the winners.

"People are our greatest resource," McHugh wrote. "The quality of your service and the depths of your commitment are reasons why our Army is the best-led, best-trained and best-equipped force the world has ever seen."

Westphal said the 22 chosen for recognition are "instruments of transformation, truly pioneers who have fundamentally changed the ways in which the Army is doing business. Our business processes are profoundly more powerful and proficient because of these men and women."

With the awards program, the undersecretary said, the Army is able to "empower a culture of seeking the best solutions at the lowest cost. These leaders have driven down the cost of doing business, not only in terms of money, but more importantly in terms of lives."

Among those whose contributions save lives are the four Soldiers who teamed to build the "HMMWV Egress Assistance Trainer," or "HEAT." The training device helps Soldiers and other service members learn to escape from an overturned Humvee.

"We built the prototype and got it inducted into Army training, and now it's part of the curriculum for every unit going down range," said Sgt. Mickey L. Hill, 82nd Sustainment Brigade, XVIII Airborne Corps, U.S. Army Forces Command, Fort Bragg, N.C.

Hill was part of a team that included Chief Warrant Officer 4 Rick Cox, Sgt. 1st Class James A. Jett Jr., and Staff Sgt. Christopher R. Whiting that devised the training device, which involves a Humvee that can be mechanically flipped using hydraulics. Their construction of the device was in response to combat losses in theater from Soldiers unable to escape from overturned Humvees.

"After so many losses in Operation Iraqi Freedom to begin with, from vehicle fatalities specifically from vehicle rollovers, FORSCOM directed their safety office to come up with an idea," said Jett. "At the time, the only training tool was a graphic training aid, a card. [Chief Cox] had the idea and came up with the materials. We assisted him in actually fabricating from what his idea was, to making it work."

The Army has now adopted that training tool worldwide, and a similar tool is now going to be used that trains Soldiers to exit an overturned mine-resistant, ambush-protected vehicle, known as an MRAP.

Whiting said the recognition is great, but he's more pleased with the results their efforts have had on the force at large. In the first year of use, there was a 31-percent decrease in Army tactical vehicle fatalities.

"I'm glad at the outcome, not necessarily what I'm receiving," Whiting said. "It's already a proven effect. The tool is there and it is a great success."

Edward E. Gozdur was another award recipient who was proud of his accomplishments. He led a team that demonstrated the capabilities of manned/unmanned aerial teaming.

"It's a great honor and I just wish my team could be here to enjoy this," Gozdur said. "We showed Army interoperability for unnamed systems. We showed how manned/unmanned teaming could improve the Army, and we showed interoperability commonality, how it can take the Army forward to save money, save lives and win the battle."

Godzur said his team was also responsible for demonstrating for the first time that all the systems could be flown with a single ground control system, or GCS, called the "One System Remote Video Terminal" that controls unmanned vehicles from the ground.

"Now one GCS can fly all the airplanes we have out there," he said. There are three such controllers now, but soon, he said "in the very near future, there will be one, and it will be with a big 'U', universal."

Before handing out awards to the winners, Westphal told them it is their kind of contribution that keeps America in a leadership position. The difference between an America that can lead, or that will fail to keep up, Westphal said, is the failure of institutions to prioritize innovation.

"Our Army, your Army, this nation's Army, will be an institution that leads in innovation, because of the people we will honor today, and others like you who are currently working and will be working in this great institution," he said.

The complete list of winners from the 2012 Secretary of the Army Awards:

Secretary of the Army Award for Editor of the Year (departmental)

-- Kathleen A. Anshant, writer-editor, Office of the Administrative Sssistant to the Secretary of the Army, Washington, D.C.

Secretary of the Army Award for Publications Improvements (Departmental)

Suggester of the Year (Civilian)

Suggester of the Year (Military)