WASHINGTON (June 24, 2011) -- On the 61st anniversary of the first day of fighting in the Korean War, representatives of nations involved in that conflict gathered here at the site of the memorial to its veterans and laid wreaths to honor their sacrifice.

The Korean War began June 25, 1950 and ended with an armistice July 27, 1953. The three-year war took the lives of more 33,000 American Soldiers and wounded nearly 100,000 of them. In all, on both sides of the conflict, more than 4.4 million military personnel and civilians were wounded, killed or went missing in action. 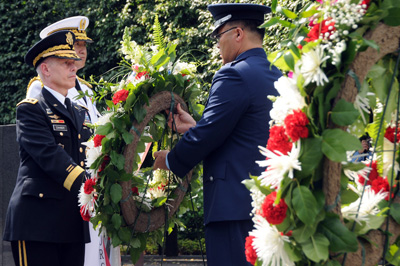 Present at the ceremony at the Korean War Veterans Memorial in Washington, D.C., was the South Korean ambassador to the United States, Han Duck-soo.

Representing the Army was Lt. Gen. Richard P. Zahner, deputy chief of staff, G-2. Military attachés from nations involved in the conflict were also present -- in their nation's military uniforms -- to lay wreaths of their own. 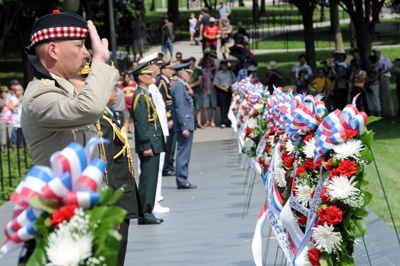 A military officer of the United Kingdom salutes, after having laid a wreath at the Korean War Veterans Memorial in Washington, D.C., June 24.

"The war has often been defined as the forgotten war," Zahner said. "But in many way it talks about a very resilient partnership between America, its allies and the American people that has endured over the years since the armistice in a way that is both profound and very vibrant."

Zahner, who has served two tours in Korea, said the event at the memorial is about marking the service of the Soldiers who fought in that country 60 years ago, as well as recognizing the enduring relationship the United States has shared with South Korea since that time. 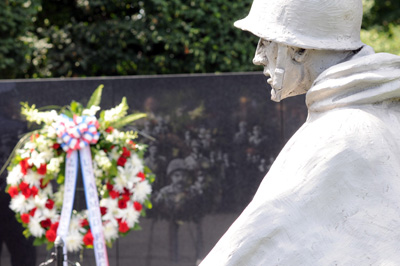 During a ceremony at the Korean War Veterans Memorial in Washington, D.C., June 24, U.S. and Korean military officers, as well as the Korean ambassador to the United States, Han Duck-soo, and military attaches from nations involved in the war, laid wreaths to remember the conflict and those who were died fighting in it.

"So we talk about a generation of veterans -- this event marks their service on an annual basis," Zahner said, adding that, like those Americans who fought in World War II, the number of Korean War veterans is dwindling.

Today, Zanher said, the relationship between the United States and Korea remains strong. And 61 years after the start of the war there, the Korean economy is as strong as the democracy that developed.

"Today when we look back, we can say that we have got the twelfth most vibrant economy in the world," he said about South Korea. "It's a tremendous democracy and a force of stability in East Asia."