WASHINGTON (April 01, 2011) -- As part of a "right-shaping" of the force, the Army will adjust retention-control points for Soldiers this fall. 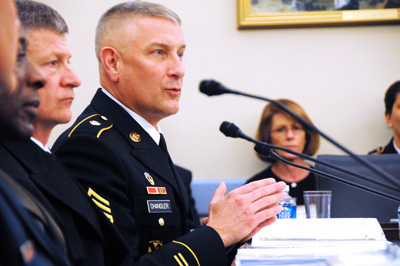 In July 2009, the Secretary of Defense authorized a temporary increase of up to 22,000 Soldiers for the active Army. This temporary end-strength increase reduced stress and strain on the force by ensuring all deploying units were filled appropriately.

"One of the things we've taken in to account is, that in order to draw the Army down and reduce that temporary end-strength initiative, we're going to have to do some right-shaping, or shaping of the force," Chandler said.

The Army's senior enlisted adviser told lawmakers the service had accelerated promotions to create the noncommissioned officer corps needed to serve as the backbone of a force that has expanded over the last 10 years while prosecuting war on two fronts.

"We accelerated promotions and we were way ahead of our normal promotion rates," Chandler said. "We're now starting to see those slow down. Which is actually a good thing for us, because it helps us to better develop that leader at their current grade instead of being put in a position where we have to accept some risk and move them ahead to be able to properly man the force."

In the fall, Chandler told lawmakers, the Army would implement the force-shaping tools needed to help reduce the size of the Army by 22,000 by the fall of 2013.

"We will actually introduce some retention-control-point reductions for our NCOs to actually reduce the amount of time they can serve in the force," Chandler said.

Retention control points specify how long a Soldier may stay in the Army at a particular rank before having to either leave the Army or get selected for promotion.

Chandler also said the Army would take initiatives similar to the Navy, to look at selective early-release boards.

"Some of our marginal achievers will be looked at and considered for separation from the service," he explained.

Those efforts will help the Army "get the right Soldier at the right time promoted to be in the right job," Chandler said. "We're very interested in ensuring we do this in a deliberate and efficient and effective manner to take care of the Army's requirements, but just as importantly (those) Soldier and family requirements."

"I sit before you as a beneficiary of the Army's behavioral-health program," Chandler said. "I myself have had the last two years of behavioral health treatment and it has made a difference in my life and my wife, Jeanne, who is with me today."

Chandler said the Army has benefited from an increase in mental-health providers.

"I believe without the increases we've had over the last several years, that we would be in much worse shape than we are now," he said. Though the service faces a shortfall in providers, he said the Army is continuing to recruit.

"It has made a difference in my life and I know in Soldiers' lives," Chandler said.

Lawmakers also asked Chandler and other service senior-enlisted advisers at the hearing about how the services would be equipped to handle conflict on another front -- in Libya.

"We exist to fight and win our nation's wars," Chandler said. "We all know that where ever the nation calls us to go is where we are going to go and do the best we possibly can."

Chandler said the Army's force generation model, or ARFORGEN, is designed to handle the current demand, and that changes in demand for forces "is going to obviously cause the Army to have to reassess what it is doing and where we are sending Soldiers and the commitment of the Guard and Reserve as an operational fore."

Nevertheless, he said, "I guarantee you that he Army will do everything the nation needs it to do."