"This is the first effort ever at doing a mobile training team concept for CSF," said Brig. Gen. Rhonda Cornum, the director of the Army's Comprehensive Soldier Fitness program. 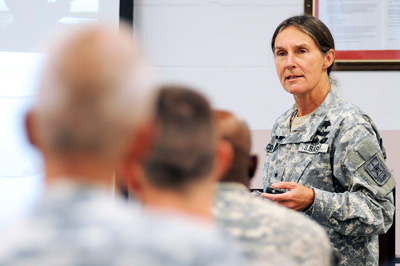 The Master Resilience Training course is part of the Army's Comprehensive Soldier Fitness program and was developed from the University of Pennsylvania's "Penn Resilience Program." The 10-day course is designed to equip Soldiers with the skills needed to better weather traumatic events -- be they money problems, relationship problems, or the horrors of combat -- and to teach other Soldiers in their units to do the same.

The Army teaches the MRT course to Soldiers now in Philadelphia, on the University of Pennsylvania campus there. The course is also taught to drill sergeants at "Victory University" at Fort Jackson, S.C.

Now, in an effort to make it easier for commanders to get their Soldiers trained up on MRT, and to reduce the cost overall to provide that training, the CSF program has developed a nine-person mobile training team that will bring the course to the Soldiers.

Cornum said that while the first 10-day course taught by the MTT is stateside, it's at overseas locations where the benefit will be the greatest.

"It is very expensive to bring 150 people for example, to here, to put them up -- and they have problems with jetlag and unfamiliarity -- and so if we can send 15 or 20 people to them it is more efficient, and I believe the training will be better," she said.

Having an additional training venue for Soldiers to learn the MRT material also increases the throughput for the course -- to help the Army meet the goal set by the chief of staff of the Army to have one MRT-trained Soldier per battalion, and another for each brigade headquarters. That's more than 5,000 Soldiers Army-wide.

"We can only train 150 at a time in Philadelphia," said Dana Whitis, the mobile training team coordinator. She also said the schoolhouse at Fort Jackson is limited to 60 at a time. "If you look at the numbers, we're not going to meet (the chief's) intent any time soon. So this gives us an avenue to ramp up numbers."

So far the Army has trained a little more than 1,300 Soldiers in MRT.

The mobile training team is made up of professionals from the University of Pennsylvania, Army civilians and Soldiers who have already gone through different levels of the MRT coursework. Sgt. 1st Class Eric Tobin, of the U.S. Army Drill Sergeant School, has attained the level-3 training already and is now part of the mobile training team.

As part of his job on the team, he conducts breakout sessions with Soldiers to reinforce what was taught in larger full-group sessions. He says it helps to have a Soldier on board to teach the material.

Tobin said what MRT provides is not a replacement for good leadership, but leadership tools. In fact, he said really good leaders likely already have many of the tools that MRT teaches -- they just don't know they are using them or what they are called.

"If you're a good leader, chances are you're doing this stuff anyway, you just don't have the verbiage we have in CSF," he said. "I've been blown up, shot at, seen my friends die -- I've come through that, and I'm stronger for it. Now I have a framework to teach that to somebody."

Tobin is an artilleryman by trade, and has served in the Army since 1996. He said initially he was skeptical of the program, but after a few days in his first MRT class last year, he was sold on the value of the program.

"I don't like people telling me what's wrong with me," Tobin said. "But after being there a couple of days, I realized that's not what it was. They were giving me tools that I could use to help myself, and in doing that, it would make me a better leader. I train this stuff on a fairly regular basis now. I think it's great. I wish somebody would have taught it to me when I was an E-5."

Cornum said that among the more than 1,300 Soldiers that have taken the MRT course, a positive review of the course is common.

"Most people have been sent to something that's supposed to be good for you before, and have not been very impressed," she said. "By about day four, you have almost universally seen the turn-around from skeptical to responses like, 'why didn't the Army do this 10 years ago?' or 'if I had had this training 10 years ago, I'd still be married.' There is no question, there is education and confidence that is built as the course goes on."