A penny saved is a lesson learned

WASHINGTON (March 31, 2009) -- It's almost never a bad idea to kneel down and pick up a penny you find on the sidewalk -- it's even a better idea to pick up that nickel, dime or quarter.

Sgt. 1st Class Scott Humphrey, an Army Reserve career counselor and his family picked up on that idea years ago and regularly go on walks near their home in Fort Wadsworth, on Staten Island, N.Y., to look for lost change. 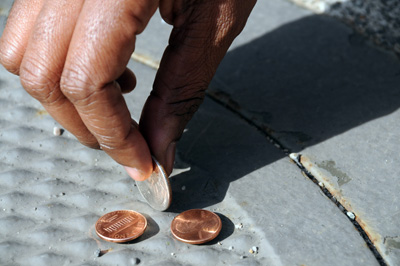 Picking up change on the street can really add up. One military family in New York City has been saving found change for more than three years now and has collected more than $1000. They say the money will eventually be donated to charity, and that going on walks together to find change is a good way to stay in shape as a family.

"It is important that we do the walks we do as a family," Humphrey said, adding that the money they find is small, but important. "When you look at it in its simplest form, a penny can make all the difference in the world."

Humphrey, his wife Barbara Humphrey, and their two daughters, 11-year-old Brianna and 6-year-old Karen, have turned pennies, other found change, and even the occasional bill into more than $1,100 dollars over the past three and a half years. In fact, since they started in October 2005, they've collected an average of 88 cents a day.

"The reason we started picking up change and showing the children the money we find, is so they learn the value of money early on," said Barbara. "Our goal is to kind of teach them a lesson. Whenever they look at change, or receive money ... and when they start to work, they know the value of money. And when they go to a store with a $20 bill, they will ask, is it really worth it to get this?"

Mostly during warming weather, the Humphrey family goes out together to look for change, Barbara said. It's a family event, meant to get time together, to get exercise and to find as many lucky pennies as possible.

"It can actually become a cute hobby," Barbara said. "The four of us when we go out on walks and things like that, we actually spend family time together. It is also a bit of a way to lose weight. We walk for miles now. It is not even just us walking around the block -- we also get to talk, and the kids get excited about it."

The two girls bring backpacks and a bottle hand sanitizer along on their expeditions.

"The girls will take a backpack on the way, and there's a kit with some Purell in there. Some change is pretty dirty," Barbara said. "Money is dirty in itself, so everybody has their own survival pack."

It's a tie between Humphrey and Brianna for who collects the most change, Barbara said. Dad can find coins even when well hidden, and Brianna has a knack for spotting paper money from a distance.

"Scott will find change in very strange places, like we can pass by construction sites where they have brick dust and he can spot a penny or a dime in that kind of environment," she said. "We have names for finding change like that.'In the wild' means it was a hard penny or dime to locate because of the camouflage. And my daughter Brianna will spot coins or dollar bills from very far away."

Barbara actually started the family off on their expeditions to find change when she was in college in 2005 earning her degree in English literature. It was there, she said, she recognized the disparity between her fellow students' willingness to complain about lack of pocket money and their reluctance to bend over and pick up a nickel.

"A lot of adults were going to school full time and complained about not having money," she said. "Meanwhile, I kept finding pennies, dimes and nickels on the floor. I was like you know what, what would happen if I would just start picking them up -- not spending it -- and just chronicled the daily finds?"

So Barbara started a blog at http://www.changepot.blogspot.com to document her daily income of dropped coins.

"At the end of the day, everybody comes to me with their change and they will say I found this in the parking lot, I found this under a soda machine," she said. "Then I kind of mix it all together and put it on the blog."

Whether the finding of pocket change drove the blogging more than the blogging drove the desire to find change is uncertain, but Barbara said when the family hit an apparent psychological milestone of $100 in change, the girls really took notice.

The total of found change listed in "Changepot," as of March 31, is about $1,116.60 -- with about $84 of that found since the beginning of Fiscal Year 2009. Barbara said she tallies the change found in line with the federal government's fiscal years, which run Oct. 1 - Sept. 31 -- noting they are a military family, after all.

That found change isn't going to end up buying a new flat-screen television, or shoes or even a fancy dinner at an expensive Manhattan restaurant, the Humphreys say. Barbara admits that even though the family collected it, they don't believe it's really "their" money.

'We are looking at different charities," she said. "And we are looking to stay local. It's a karma thing; we feel it isn't our money and we want to help whoever needs it most -- we want to donate."

And really, going out as a family to find change is more important than adding change to the bank account anyway, she said.

"It really isn't about finding the change -- it's about keeping the family together," she said. "Now we have a hobby we can do. The change jar in itself is a vehicle for change for everyone -- and it's a valuable lesson on how the economy directly impacts Americans and how as much as they complain they have no money, if you do something as small as picking up a coin every time you see one -- in four years you'll have over $1,100 dollars."