WASHINGTON (May 05, 2008) -- During a recent Army funeral at Arlington National Cemetery, a woman escorted by a member of the Army's 3rd U.S. Infantry (The Old Guard), stood silently near the gravesite.

Not related to the Soldier being interred that day, she is one of about 65 women, known as the Arlington Ladies, who volunteer to attend Army funerals held at the nation's most hallowed cemetery. So every time a Soldier is buried there, an Arlington Lady is present. 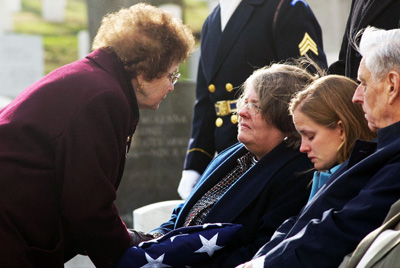 After the folded flag is presented to the fallen Soldier's family, the Arlington Lady steps forward to offer words of condolence.

They attend funerals in the heat, in the snow and in the rain. They are present for the burial of the youngest Soldier who was killed during his first tour in Iraq and for the World War II-era Soldier who spent his last years in the Old Soldiers Home in Washington, D.C.

The Arlington Ladies stand a silent vigil at funerals attended by dozens of mourners and at funerals where a Soldier has no next of kin - no friends present to render a final salute. In fact, that is the very reason they attend funerals.

Since 1973, the Arlington Ladies have ensured that no Soldier - old or young - is ever buried alone.

The idea for the Arlington Ladies came about when Air Force Chief of Staff Gen. Hoyt S. Vandenberg noticed no friends or relatives were on hand for some Air Force funerals. When he told wife, Gladys, of his concerns, she mobilized members of the Officers Wives Club to begin attending funerals.

In 1973 Julia Abrams, the wife of Army Chief of Staff Gen. Creighton Abrams Jr., became concerned about Soldiers being buried at Arlington Cemetery without family or friends present and established the Arlington Ladies.

Today, the Air Force, the Army and the Navy all have Arlington Ladies who perform similar duties at the cemetery for members of their respective services.

Many times it's the older Soldiers, the ones who served in Korea and World War II, who have no one to attend their funerals.

Nancy Graves, an Arlington Lady since 1978, said she has attended several funerals where there are no family members or friends present at a Soldier's burial.

Besides honoring the Soldiers who are buried at Arlington, the ladies also extend to grieving family members the sympathy of the Army chief of staff and the entire Army family, said Margaret Mensch, Arlington Ladies chairwoman.

"We've been accused of being professional mourners, but that isn't true," she said. "I fight that perception all the time. What we're doing is paying homage to Soldiers who have given their lives for our country."

Each month Mensch creates a schedule, assigning two volunteers for each day a burial will be performed. The volunteers learn the day before how many funerals they will attend and who will be interred, either in the ground or in the cemetery's columbarium.

Arlington National Cemetery holds as many as 100 funerals a week, Monday through Friday. That's about 20 funerals a day. In recent years, that number has risen even higher. About half of the funerals are for Soldiers, and they are split between the two Arlington Ladies on duty each day.

Graves has lost count of the number of funerals she's attended over the past 30 years, she said. Today, eight to 10 Soldiers are interred daily. "So we each attend five funerals a day, on average," she said.

When the Arlington Ladies began attending funerals some 35 years ago, they attended alone. But later they felt, as did the Army, that they needed to be made a more official part of the ceremony. So today Arlington Ladies attend the funerals with a military escort from the Army's Old Guard.

Pfc. Lyle Eagle is a member of the Old Guard and often escorts the Arlington Ladies. He also is a scheduler for other escorts. Soldiers who perform escort duty respect the Arlington Ladies, but are usually cautious at first, he said. That's because some of them are the wives of high-ranking officers and, as military partners, have witnessed decades of military history. 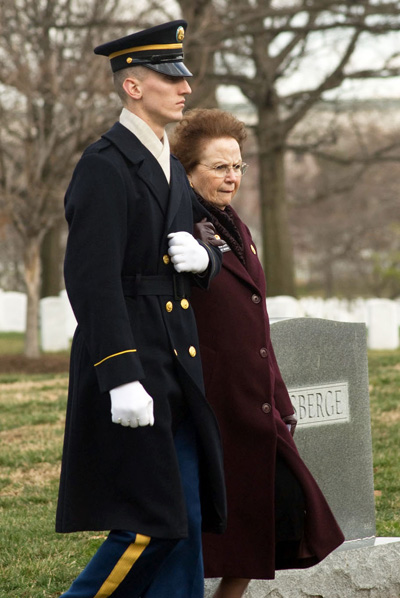 An Arlington Lady is escorted by a member of the Old Guard.

After working with the ladies for a while, the escorts are able to relax a bit and talk more informally, Lyle said. It is then that they learn about some of the Army history the ladies are privy to.

"For some funerals you have a few moments in the vehicle to talk to the ladies. They tell stories about their husbands' exploits, how the Army used to be and how it has changed over the years," Lyle said.

The Army escort and the Arlington lady meet before each funeral at the cemetery's administration building and travel together, often with the military chaplain who will perform services, to a Soldier's gravesite.

They wait together near the burial site for the Soldier's casket to arrive, and then walk together to the burial site. There they wait silently, she holding his arm until the moment when the folded flag is presented to the deceased Soldier's next of kin. It is at that moment the Arlington lady steps forward and breaks her silence.

She approaches the widow, widower or grieving mother and father, and offers words of condolence. Then she presents the loved one a card from the Army chief of staff and his wife and a card from the Arlington Ladies.

Arlington Ladies may also have words of their own for the family members with whom they interact. Barbara Benson has been volunteering with the Arlington Ladies for 33 years and is the longest-serving Arlington Lady. She feels a special connection with older military wives who have lost their husbands and often asks them about their relationships, she said.

Benson was a former Soldier herself, serving as a flight nurse after World War II. Her own husband, Col. George Benson (Ret.), died in December. Another Arlington Lady, a friend, comforted her at the funeral.

Chaplain (Maj.) David Baum said presiding over funerals at Arlington is an honor and each respective funeral helps loved ones grieve.

"The ceremony is a beautiful event to help families honor their loved ones," he said. "I think it reminds them that the Soldier who died was part of something very important: service to his nation," Baum said.

Because the Arlington Ladies are all former or current military spouses, "they help to put a family face on the ceremony," he added. "They remind us that military service is often a family experience. Their presence brings home the fact that the entire Army family shares in their loss."

Arlington Ladies volunteer for the service for many reasons - patriotism, honor and selfless service among them. Some of the ladies have felt part of the Army for the many years their husbands served and some served themselves. Those ladies want to continue that service to the Army for as long as they can.

Benson said she participates so she can continue to serve Soldiers, even 60 years after her own service at the end of World War II.

"I don't know how to say it really," she said. "I guess because I identify with Soldiers. That was my life for 31 years. So it just seems like the natural thing to do."

The Arlington Ladies serve, they say, because it is an honor for them to let families know the Army has not forgotten the service their loved one gave to the United States. And their service, like that of the Soldiers they honor, is representative of the Army's value of selfless service.