Raptor 4087, bearing "AK" on its tail, is bound for Elmendorf Air Force Base, Alaska. It will be the first of 36 Raptors, in two squadrons, to be assigned to the installation. 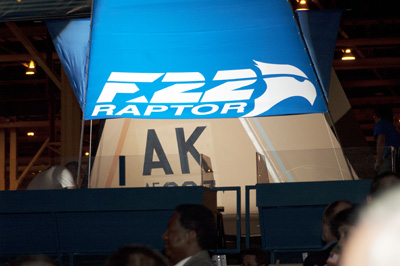 The tail section of an F-22 Raptor being assigned to Pacific Air Forces is prepared for an unveiling ceremony Aug 3 at the Lockheed Plant in Marietta, Ga. The aircraft, which is still under construction, will be the first of 36 F-22s assigned to Elmendorf Air Force Base, Alaska, beginning next year.

Gen. Paul V. Hester, PACAF commander, and others from PACAF gathered at the Lockheed-Martin facility here for a ceremonial unveiling of the tail flash on Raptor 4087. While the aircraft is still in production, it is expected to roll off the assembly line and be ready for delivery in Feb. 2007.

Initially, the aircraft will go to Langley AFB, Va. for pilot and maintainer training.

"Just like we did when we introduced the F-15 Eagle to the Air Force -- when we did a Ready Eagle program -- we are going to do a Ready Raptor program at Langley AFB," General Hester said. "We are going to take our F-22s to Langley, sit on the ramp, learn from them -- maintenance operations as well as pilot operations -- and then in about 8 months we will deploy our first six or so Raptors to Alaska "

General Hester said PACAF pilots and maintainers will be fully prepared to utilize the aircraft in early 2008, when he declares initial operational capability.

"This is a great opportunity for PACAF," General Hester said. "And we're very excited about our first (Raptor.)"

Those capabilities include the ability to "supercruise," or fly above the speed of sound without the use of afterburners. The F-22 also has stealth capabilities, featuring a radar signature the size of a small bird. In combat, the Raptor also excels at both air-to-air and air-to-ground combat, and is capable of performing the two missions at the same time, something no Air Force legacy aircraft is capable of.

The F-22 also brings to the fight the ability to integrate, through datalinking, Air Force legacy aircraft such as the A-10 Thunderbolt II, the F-16 Fighting Falcon, and the F-15.

"It positions them better, alerts them to danger better, targets them against targets faster, and allows them to be more successful on the battlefield," he said. "And as it does those things for legacy systems inside the Air Force, it does those same things for legacy systems in other parts of our services, in our Harriers, in our F-18s and in the airplanes other services fly."

Pacific Air Forces will eventually get three squadrons of F-22 aircraft. Two of those squadrons will be at Elmendorf AFB, the third will be at Hickam AFB, Hawaii.