SOUTHWEST ASIA (July 23, 2004) -- Airmen at one forward deployed location — engaged daily in a routine of work, chow and picking up laundry — may not think to look up in the sky. But if they did look up, they would see something looking right back at them.

Flying at about 300 feet above the ground is a small foam aircraft with a built in video camera. But the plane isn’t there to spy on Airmen as they go about their efforts to support the war on terrorism. Instead, it’s on its way to the perimeter of the installation, where it will fly about looking for suspicious activity. The craft serves as an eye in the sky for the force protection personnel deployed here; it’s another layer of security, a deterrent — it is the Desert Hawk. 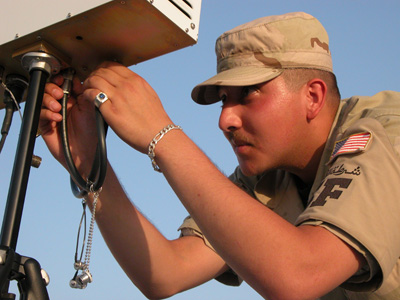 Senior Airman Alexander Jimenez, 379th Security Force Squadron Force Protection Airborne Surveillance System program, makes adjustments to the antenna that controls the Desert Hawk unmanned aerial vehicle. The Desert Hawk is a small foam aircraft with a built in video camera that is used by security forces personnel to monitor the perimeter of an installation. Airman Jimenez is deployed from Spangdahlem Air Base, Germany.

“We fly the Desert Hawk at different times of the month, depending on what’s occurring in the local area,” said Senior Master Sgt. Nicholas Liberti, the Security Forces Operations Superintendent. “Desert Hawk is part of the Force Protection Airborne Surveillance System and is a force protection multiplier for the installation. It is a layer of defense that provides early-warning and detection ability.”

Physically, the Desert Hawk is not a big aircraft. It has a wingspan of about 52 inches, is less than three feet long and weighs around seven pounds. Its mission is pretty big, though.

“Without the Desert Hawk, we would have less ability to provide security against the man-portable air defense systems threat to the base,” Sergeant Liberti said. “That’s what this aircraft is designed to do, control the MANPADS threat.”

Essentially, the Desert Hawk is keeping an eye out for bad guys with access to MANPADS. MANPADS are fairly easy-to-obtain, shoulder-launched weapon systems that have the capability to destroy or damage U.S. and Coalition aircraft.

Should the Desert Hawk see such a threat, local security forces respond with the right level of force.

“If the Desert Hawk does happen to fly over something, we can spot it at that moment and then dispatch Guardian units out to assess the situation,” Sergeant Liberti said.

The FPASS program is run entirely by enlisted Airmen. Maintenance on the craft, launch and recovery efforts and even piloting of the bird are handled by specially trained volunteers from the Security Forces career field. While FPASS program team members are still regular security forces, their program is a departure from the normal flight duties, said Staff Sgt. Nancy Gonzalez, FPASS program lead.

“What we do is very different from regular security forces work,” Sergeant Gonzalez said. “But we still get to carry a weapon.”

Sergeant Gonzalez has about 17 Desert Hawk flights under her belt. She said her favorite part of the job is putting the plane in the air.

“I think the launching and landing of the plane is the best part,” she said. “You hook it up to a bungee cord, stretch it out and let it go.”

According to Sergeant Gonzalez, it takes two Airmen to launch the Desert Hawk — a pilot and a copilot. The pilot holds the aircraft about five feet off the ground. The copilot attaches the end of a bungee cord to plane and then walks away, stretching the cord tight and charging it with just the right amount of potential energy to launch the tiny plane into the air. The copilot wears a vest and helmet just in case the plane should launch into his chest instead of climb skyward.

The plane doesn’t start out with the engine running, however. That doesn’t happen until after it’s shot into the air.

“After we launch, and it goes over fifty feet per second, the motor engages,” Sergeant Gonzalez said. “After that, it flies itself on the path you have programmed.”

The plane’s battery power and tiny propeller can keep the craft in the air for approximately 60 minutes, she said. 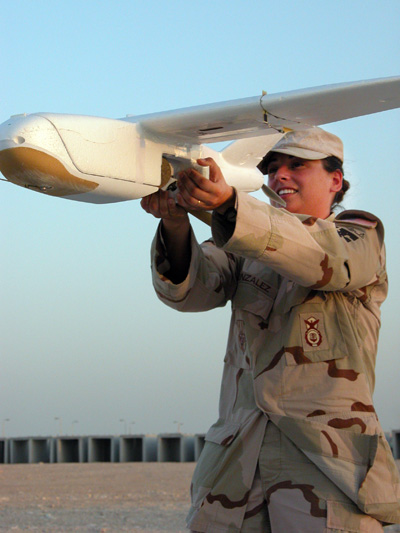 Staff Sgt. Nancy Gonzalez, noncommissioned officer in charge of the 379th Security Force Squadron's Force Protection Airborne Surveillance System program at one forward deployed location, prepares to launch the Desert Hawk unmanned aerial vehicle. The Desert Hawk is a small foam aircraft with a built in video camera that is used by security forces personnel to monitor the perimeter of an installation. The Desert Hawk operators slingshot the craft into the air with a 50 foot bungee cord. Sergeant Gonzalez is deployed from Spangdahlem Air Base, Germany.

The main body of the Desert Hawk is made of high-density foam and costs about 300 dollars. If it needs repair to its frame, it’s Sergeant Gonzalez or members of her team that do the repair.

“They do their own work on the bird if it breaks,” Sergeant Liberti said. “They put the pieces back together and use glue or tape — whatever it takes to keep it flying. They do all the maintenance.”

The Desert Hawk sees a lot in the sky both day and night. In fact, there are two models of the plane. The first is equipped with a small digital camera that looks similar to what computer users may have on top of their monitor. The camera transmits images via radio wave back to the ground control station. There, Sergeant Gonzalez and her copilot can watch the images on a small video screen and record them to video tape. Another Desert Hawk model is equipped with an infrared camera. Like a Security Forces Airman with a set of night vision goggles, the nighttime Desert Hawk can see in the dark.

“The plane provides real-time footage, day or night, of the exterior of the base,” Sergeant Gonzalez said.

The Desert Hawk has many of the same features as a larger aircraft. It has wings and flaps. It’s got a tail, a motor and a propeller. What it doesn’t have is a “stick” in the cockpit. Of course, on a plane this small there is no cockpit either. Control of the aircraft comes from a portable ground control station. Instead of flying with manual inputs by a pilot, the Desert Hawk flies a predetermined route programmed in to its onboard control system with the aid of a laptop computer.

“You program a flight into the computer, indicating where you want it to go,” Sergeant Gonzalez said.

Using an onboard global positioning system receiver, the Desert Hawk is able to keep itself on the course Sergeant Gonzalez programmed it to fly. That means that the operator on the ground isn’t really telling the craft where to go once it’s in the air. But that doesn’t mean she couldn’t reprogram it in mid-flight. In fact, being able to do so is critical to the Desert Hawk mission.

“I don’t steer the plane,” Sergeant Gonzalez said. “But if I see something suspicious I can program it to go elsewhere. I can also have it hover over head and move the camera to view.”

Landing the Desert Hawk is a bit different than landing a regular airplane, because it has no wheels. Instead of coming in for a traditional landing, it comes in for what amounts to a controlled crash.

Sergeant Gonzalez must ensure the wind, terrain and angle of descent are all correct and may have to do several passes before the plane can be brought home safely. Still, should the craft come down hard, it is pretty tough.

“It has Kevlar protection on it,” Sergeant Liberti said. “But when it quits flying, it falls like a rock.”

The Desert Hawk is not as expensive, or as sophisticated as its bigger siblings, the Global Hawk or the Predator. It can’t fly as far and it can’t deliver munitions. But its mission is as important to ground based security forces in deployed locations as the bigger craft are to the Air Force as a whole.

“This is nothing on the grand scale of the other UAVs,” Sergeant Liberti said. “Still, this is an extremely important program. It is another layer of security on the base. It is a deterrent. It is another set of eyes that can detect potential hostile activity.”