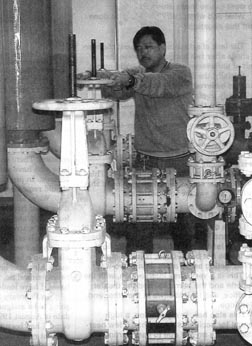 While it is not unheard of for a squadron to take three Air Force level awards, it is not commonplace.

"I went through the awards announcement last week and we are the only base in the Air Force to win three Air Force-level CE awards," said Lt. Col. Timothy Gaffney, 35th Civil Engineering Squadron commander. "This is truly an outstanding accomplishment, one I am truly proud of"

The CES operations flight is made up of more than 400 people and is responsible for the operation and maintenance of base facilities and infrastructure systems. These systems include base power generators, water and waste-water systems, airfield/pavement maintenance, snow removal, plumbing, heating/air conditioning, carpentry and electrical distribution in base buildings and a slew of behind-the-scene responsibilities that keep the day-to-day operations going.

The flight was named the best civil engineer operations flight in the Air Force for such accomplishments as its energy use reduction program that reduced energy use on base by as much as 30%. The savings to the base was nearly $145,000.

I'm extremely elated of receiving the award since it recognizes what each and everyone from the operations flight accomplished throughout the year," said Maj. D.J. Junio, 35th CES operations flight commander. "It is a testament to the many great things the CE operations folks do ... not just military, but civilians as well."

Junio highlighted the significance of the award.

Be proud of this accomplishment," Junio told his troops. "This award recognizes your outstanding efforts throughout the year."

Today, this week, this month and this year, you can say something no other civil engineer in the Air Force working in an operations flight can say," said Junio. "You can truly say you are the best in the Air Force at what you do."

One member of the flight who can be doubly proud is Kenji Taneichi, civilian foreman of the waste water treatment plants on base.

He has been at Misawa for nearly 16 years and was recently named the Air Force's outstanding civil engineer civilian technician of the year.

Taneichi was named the best in the Air Force for his management of four wastewater treatment plants at Misawa. The plants treated in excess of 30 million gallons of waste water a month without a single violation of the Japanese Environmental Governing Standards.

Taneichi is also noted for his initiative; for the 2000 air show, he volunteered to escort contractors onto the base for placement of nearly 200 portable toilets.

While proud of his accomplishment, Taneichi remains humble.

In celebration of the award, Taneichi's family treated him to a party at a local sushi bar.

The flight, made up of more than 80 members, responded to some 475 emergency calls last year, protecting nearly $2 billion in resources.

Additionally, the flight received recognition for their response to a KC-135 that skidded off the runway and became entangled in overrun netting. Flight members swiftly removed passengers from the aircraft and freed the aircraft.

Additional accomplishments by the flight included the search and rescue of a downed skier during a blizzard and the rescue of a construction worker who was trapped in an .underground storage tank.

"For me and my staff, this is the culmination of our work for two years. This is a phenomenal accomplishment," said Chief Master Sgt. Mark T. Giuliano, 35th Fire Protection Flight fire chief.

The flight was recognized as much for being reactive as for being proactive. The flight's Firefighters Active In the Housing Areas, or FAITHA, program is one that made them the best fire protection flight in the Air Force.

"Once a week, a fire truck will drive around base and go into the housing areas," explained Giuliano. "Firefighters will knock on the doors of residences and politely ask to come into the home to check smoke detectors, inspect fire extinguishers, pass out fire safety literature, and check for 911 stickers on the phones.

"Nobody in PACAF is doing this, just us," he said. "This is going to be a model program for them I am sure."