Up, up and away! Weather forecast critical to missile launch

KWAJALEIN, Republic of the Marshall Islands (March 01, 2011) -- Mark Bradford makes sure Mother Nature is going to cooperate with the mission at the Ronald Reagan Ballistic Missile Defense Test Site on Kwajalein, an atoll in the western Pacific.

Often, the mission requires a clear blue sky. Or at least a portion of the sky needs to be clear. Even cirrus clouds -- the wispy feathers that form as high as 10 miles -- can affect the mission, said Bradford. 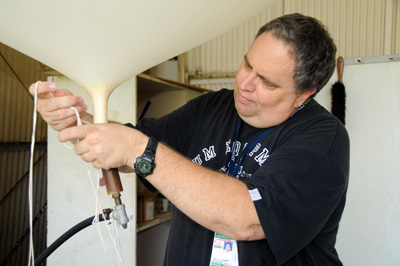 Mark Bradford, the lead meteorologist at Kwajalein, ties a a weather balloon to launch into the atmosphere.

"We go very high, up into the mesosphere," up to 50 miles above the Earth's surface, said Bradford, the lead meteorologist on the island. He's been working Kwajalein's weather -- on and off the island -- for 25 years.

Bradford and his team provide daily weather forecasts to those who run the mission at RTS, to ensure they always know if it's going to be OK to conduct operations -- a launch for instance.

"Really what we do is we're here specifically for mission support," he said. "We document the existing weather and forecast it in the areas of concern for each mission. When weather exceeds acceptable constraints, we warn and also try to find acceptable areas where they can operate."

Bradford said those who plan missions at RTS are concerned about such things as rain, lightning, winds and thunderstorms.

But what Bradford does on Kwajalein needs to be much more accurate and specific than what's done in the States -- the kind of weather forecast that lets you know if you can go to the beach or if school will be cancelled due to snow.

"We have particular research techniques that come out of the University of Wisconsin," he said. "We can cut and layer through upper level clouds and really detect and see very thin clouds and determine the altitude of those clouds. We're using a number of techniques that people just don't use." 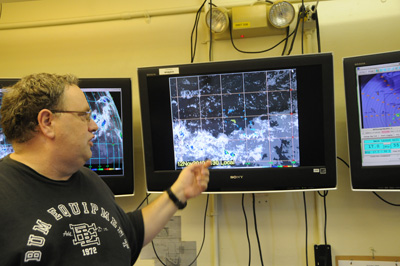 Mark Bradford, lead meteorologist, is responsible for ensuring the weather over the island will cooperate with the mission.

Bradford said the weather that affects the mission on Kwajalein that he must look for, doesn't allow him to forecasting that meteorologists in the States are focused on.

Another element of Bradford's mission on Kwajalein is to collaborate with a worldwide network of meteorologists who collect weather data all over the globe and feed it into a central database.

Part of that routine involves the twice-daily launch of a weather balloon with a sonde attached by a dangling string. The sonde is a small, disposable weather station that contains air pressure, temperature, and humidity sensors, as well as a GPS receiver and radio.

When Bradford launches the sonde, it sends signals back to his shop -- just outside the island's airport -- and he can capture weather information live as the balloon rises to some 39,000 feet.

"All around the world, thousands of places are launching these balloons and sending these packages off all at the same time," Bradford said. "Since 1955...this is still the primary way of getting the information about the atmosphere, how it is flowing, and what the weather is doing." 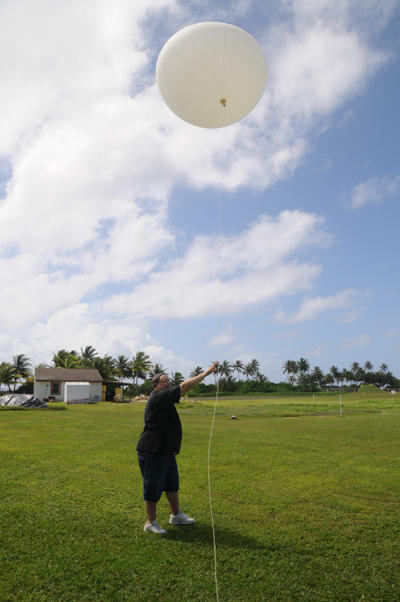 Mark Bradford, the lead meteorologist at Kwajalein, prepares a weather balloon and sensor to launch into the atmosphere. He and his team conduct two such launches every day.

Eventually the weather balloon pops, Bradford said, and the sonde plummets to earth. Generally, the $300 portable weather station is lost forever -- but not always.

"I once worked on a big international project in Switzerland and they would keep their software on, even as the sonde fell," Bradford said. "One of their sondes started coming down... and it landed in the mountains some miles away. But then it started getting closer and closer to us, until a farmer came in and handed them their sonde back. It fell in his field and so he just brought it back to them."

The missile testing missions conducted on Kwajalein are expensive endeavors, Bradford said. And the wrong kind of weather can have a big impact on operations there.

"It has millions of dollars of adverse effects on technical operations like this," he said.

Bradford and his team work to provide the most accurate weather information possible to ensure the success of a customer's testing mission. It means more than a macroscopic view of weather in the region -- it means accurate details and predictions of the minutest systems, so RTS customers can be assured their test results are reproducible.

"We're really looking for very small, difficult-to-diagnose systems that change very quickly in time," Bradford said. "Most people really give that up as a roll of the dice. But we can't rely on the role of the dice here."