Soldiers learning to 'bounce back' in Philly

WASHINGTON (Nov. 16, 2009) -- In Philadelphia, the Army is equipping Soldiers with a new tool designed to help them better deal with the psychological effects of combat that can lead to post traumatic stress disorder.

A group of 155 noncommissioned officers are attending the first official "master resilience training" program Nov. 8-19. The training is part of the Army's Comprehensive Soldier Fitness program and was developed from the University of Pennsylvania's resilience program. Three past groups of Soldiers attended related training as the UPenn program was modified to meet Army needs. 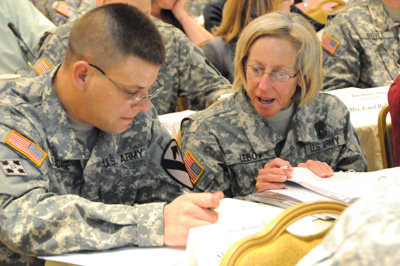 "This is the first really full-scale MRT course; the culmination of a lot of work," said Brig. Gen. Rhonda Cornum, director of Comprehensive Soldier Fitness. "And we truly believe this is instrumental in improving ... the psychological fitness of the force."

The current 10-day course, still put on by professionals from UPenn in conjunction with the Army, is designed to equip Soldiers with the skills needed to teach other Soldiers how to better weather traumatic events -- be they money problems, relationship problems, or the horrors of combat.

"The title misleads you, but when you get it broken down, you see that all this is, is life lessons," said Staff Sgt. David Breeden, an MRT student and an Army drill sergeant who "makes infantrymen" through a One Station Unit Training program at Fort Benning, Ga. "If you can relate to the individual you can help the individual."

Breeden's been to both Iraq and Afghanistan and says that in combat, every Soldier needs to be on their game. A Soldier that's got personal issues, or issues coping with the stress of combat, may be a liability to his unit, he said. The Soldier that can cope is the Soldier that is resilient.

"If you are in combat you have to be able to decompress," Breeden said. "Some Soldiers just are brittle. They don't have that resiliency factor of being able to bounce back from a traumatic event -- and it does cause issues. That Soldier can no longer help with being a team player, and the team has to turn around and help that individual and it takes away from team readiness."

Helping potentially brittle Soldiers become Soldiers more likely to "bounce back" from or cope with stressful events -- such as witnessing the death of a friend or a child in combat, financial issues, or the potential disintegration of a relationship back home -- is the goal of Comprehensive Soldier Fitness. And teaching those skills to Soldiers will be the job of NCOs who attend master resilience training courses like the one in Philadelphia.

Dr. Martin E. P. Seligman, a psychologist, and director of the Positive Psychology Center at the University of Pennsylvania, said the goal of CSF is to improve the resilience of all Soldiers in the Army. He said graphing the human response to adversity produces a curve much like the plot for test scores in nearly any classroom.

"The response to high adversity, to trauma, in human beings, is bell shaped," Seligman said. "On the extreme left you have people who collapse. We call it PTSD, depression, anxiety, divorce, substance abuse and suicide. The center of the curve is normal human resilience -- the normal response to human adversity is to come back to where you were. And over on the right-hand side of the curve, very important, is what's called post-traumatic growth."

Inside the Army, Seligman wants to adjust the shape of that curve by equipping Soldiers with the tools needed to be more resilient to psychological trauma.

"The question is, what should the Army be doing by way of helping our Soldiers who are probably in for a decade of persistent warfare," Seligman said. "To my mind, it is to move the whole curve to the right ... moving the whole distribution toward higher fitness."

Course leaders, including Seligman and Dr. Karen Reivich, help to move that curve to the right by "building mental toughness." That involves skills like avoiding thinking traps, detecting "icebergs," and learning to put things into perspective.

"We teach people to recognize the most catastrophic, unrealistic things they say to themselves when adversity strikes," Seligman said. "We teach them to argue against the most catastrophic thoughts; realistically, to put them into perspective. This is a well-defined technique that's been validated with tens-of-thousands of people in cognitive therapy procedures."

Part of MRT also involves helping Soldiers identify their strengths and how to use them to their advantage.

"We found that when people work from their highest strengths, as opposed to trying to remediate weaknesses, they do better," Seligman said.

Sgt. 1st Class Rebekah James, with the 743rd Military Intelligence Battalion, Buckley Air Force Base, Colo., has been in uniform for 14 years now and served in Afghanistan in 2008. She explained that she learned "thinking traps" can often include jumping to conclusions.

"You call your wife or girlfriend or whatever, and she doesn't answer the phone five times in a row," James said, saying a Soldier might conclude that she's cheating on him. "But that's jumping to conclusions, and you don't have facts you need. But thinking is not fixed, it can be changed -- the way we handle our thoughts -- we can actually control them. We can choose how to react and what emotions to use when confronted with an event."

Learning to deal better with emotions and with reactions to an "activating event" is what Soldiers will learn as part of MRT. And they will also learn to teach that to other Soldiers in their units.

Seligman said he's aware that a course where "feelings" are discussed might not appeal to Soldiers -- but he says Soldier's that have taken the course have recognized its value.

"One of the things we worried about when we started the pilot work was that these tough sergeants would say 'oh this is girly, touchy-feely stuff, we don't want it,'" Seligman said. "And what we've been getting is, 'this toughens us.'

"The heart of resilience training is not like a lot of the psychological touchy-feely-huggy stuff. Rather, it's when adversity strikes, how can you respond to adversity with increased resilience -- coming back, and not collapsing."

Both Breeden and James say they believe they'll find use for MRT at their home units -- even in their homes.

"I believe this will be a great tool in warrior leaders course for new leaders coming into a leadership position," Breeden said. "It helps to refine the tools you have. Some things I'll be able to use in my job and some things at home as a father and as a husband."

James said she sees benefit in taking what she learns in Philadelphia back to her home unit and passing it on to Soldiers.

"The skills I'm learning here are imperative to being a good leader," she said. "I think once I get back to my unit, by having these tools, and talking to my Soldiers, I'll be able to use these skill sets to better help them become resilient themselves."