WASHINGTON (Oct. 06, 2008) -- Two Soldiers, both from the reserve components, were named the Army's best warriors during the 2008 Association of the United States Army Annual Meeting and Exposition here. 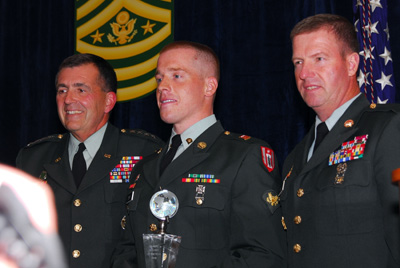 Vice Chief of Staff of the Army Gen. Peter W. Chiarelli; Spc. David R. Obray, U.S. Army Reserve Command; and Sergeant Major of the Army Kenneth O. Preston were on stage Oct. 6 during a lunch at the 2008 Association of the United States Army Annual Meeting and Exposition to announce the winners of the 2008 Army Best Warrior Competition. Obray was named the Army's Soldier Officer of the Year for 2008.

The two Soldiers, along with 22 of their peers -- a total of two Soldiers from each of 12 Army major commands -- competed for the titles during the "Army's Best Warrior Competition" Sept. 29 to Oct. 30 at Fort Lee, Va. The competition is in its seventh year, the first was held in 2002.

"This is a direct reflection of the goodness of what the National Guard and Army Reserve provides for the Army," said Sgt. Maj. of the Army Kenneth O. Preston. "It's the civilian-acquired skills, the education, that our Soldiers, our Citizen-Soldiers bring to the fight every day that makes us who we are."

The week-long competition includes events designed to test a Soldier's mettle in areas like land navigation and physical fitness as well as their knowledge of various warrior tasks and battle drills.

Overall, the competition asks Soldiers to show their ability to complete the tasks most often needed in battle in Iraq and Afghanistan. Challenges from the competition are drawn from real-life scenarios in the global war on terror.

"Each year what we have tried to do is take the competition and improve on what we have done in the past, and improve from a perspective of what are our Soldiers and leaders doing out there every day in combat operations," said Preston.

He also said the Army-level competition, and the smaller company- and battalion-level competitions Soldiers must compete in to get to Army level, are designed to get competitors to concentrate on the knowledge and skills needed to become better leaders and Soldiers.

"What they do is promote self-development and self-study and it gets our young Soldiers and NCOs really getting into and studying doctrine and becoming subject-matter experts in their professions," Preston said. "I'm very proud of what these warriors have accomplished and all the ones that competed in the competition."

Both Noyce Merino and Obray said they were honored to have competed in the Best Warrior Competition -- along with some of the best Soldiers in the Army.

"A lot of competitors, especially the NCOs, were just extremely skilled Soldiers," Noyce Merino said. "I felt honored to be competing against them. Now that I have won the competition, I feel it is my responsibility to represent them and all the Soldiers in the active Army and the Guard."

He said that upon beginning the competition, he found it exactly as he expected it to be, based on the preparation he had done in advance.

"I read about it when I first came to the Army -- I imagined what it would be like to compete in something like this," he said. "When I got there I had kind of an idea what it would look like. I also talked to the person that represented the National Guard last year and got all the information from him that I could. He told me about his experience. I felt I was prepared. I definitely felt challenged."

Obray said he knows he hasn't seen the last of the Soldiers he competed against.

"My fellow competitors were outstanding individuals and there is no doubt I will see them again," he said. "From the beginning my mindset was this is a lot of training and I looked forward to brining it back to my unit."

Both Soldiers said they had fun and learned a lot during the Best Warrior Competition, each citing different portions of the competition as their favorite challenge.

"The most fun was the moving and shooting," said Noyce Merino. "We had one (event) where we had to move a casualty to cover and then fire from different protective barriers and in different positions and moving targets. And that was the one I enjoyed the most. The most realistic part was the medical trauma lane. I saw a lot of elements in that that I've seen on my deployments -- in real life. I was real glad they had something to simulate that." 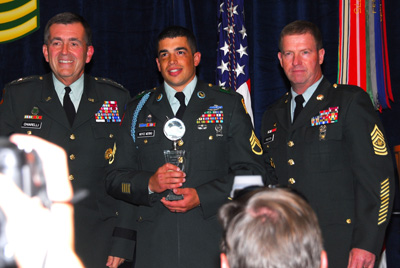 Vice Chief of Staff of the Army Gen. Peter Chiarelli; Staff Sgt. Michael T. Noyce Merino, Army National Guard; and Sergeant Major of the Army Kenneth O. Preston were on stage Oct. 6 during a lunch at the 2008 Association of the United States Army Annual Meeting and Exposition to announce the winners of the 2008 Army Best Warrior Competition. Obray was named the Army's Soldier Officer of the Year for 2008.

Obray said he felt the competition effectively simulated what is going on overseas in the global war on terror. For him, the biggest challenge was mastering the weapons the Army uses.

"Being relatively new to the Army I had a difficult time remembering how all the different pieces of the weapons assembled, so that was my biggest challenge," he said.

During a press conference following the announcement of their win, Merino and Obray talked about some of their perspectives on Soldiering today, and changes in the Army.

Merino said seven years of war has made better the NCO leadership on the ground in Iraq and Afghanistan.

"What I've seen is that there are a lot more veterans now -- a lot of the guys I've (deployed) with are on their second, third or even fourth time over there," he said. "And now you are getting the experience from previous deployments that is flowing over and you are seeing veteran leadership. Veteran NCO leadership and veteran Soldiers -- the entire force is improving."

Obray said that better equipment is flowing through the Army and that is improving his ability to do his job.

"The technology improvements, different equipment I've used, has helped the Army evolve -- and become a more effective fighting force," he said. "Whether it is safety equipment or equipment I use on my drill weekends, it helps with the nation's mission. As a mechanic we've had some upgrades in our tools -- so I've become more effective with my time. Now I don't have to spend time looking for the right equipment -- I have a toolkit I can take out with me now."

"I've been in the Army for three years now," Obray said. "And from the beginning of my enlistment I've seen (suicide) awareness promoted, what are the correct channels to deal with problems you might be having if you are looking at a decision of that magnitude. But also, just information on how to handle that sort of decision."

Merino said that in the Army, sexual assault is not tolerated. And that while the issue is heavily discussed at the highest levels of the Army, the message has effectively filtered down into the realm of the most junior Soldiers.

"We see every Soldier, everybody that is in uniform, as part of a brotherhood," Noyce Merino said. "Sexual assault is a violation of that trust we have. There is no leeway for that, no place for that. We don't accept that, we don't condone it. Every Soldier we've come across knows what the standards are, and knows what is expected of them -- and sexual assault is not tolerated in any way."

Prior to announcement of the winners of the Best Warrior Competition, Soldiers in attendance at the lunch heard from Vice Chief of Staff of the Army Gen. Peter W. Chiarelli. The general told the gathered Best Warrior competitors, junior enlisted, noncommissioned officers -- all Soldiers -- that the Army owes them a debt of gratitude.

"There can be no higher honor than to serve with you and your families," he said. "For that I thank you as one Soldier to another. We who serve you owe you a debt of gratitude."

But the general also said those Soldiers owe something to the Army and to the nation: to pass on their expertise in order to sustain the excellence of the force.

As winners of the Best Warrior Competition, Noyce Merino and Obray will both get prizes, money and time off of work. The two will return to their duty stations, but will be called upon over the course of the year by the sergeant major of the Army to participate in Army events and to act as goodwill ambassadors for the Army.