"When I got out of high school I had a job but I also felt I had an obligation to my country," he said. "So I volunteered for the draft. I wanted to help my country, I wanted to go -- and I did." 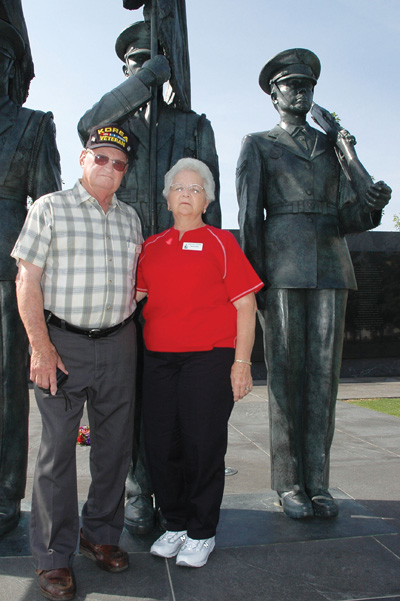 Vic Kassing and Mary Kassing, from Mt. Sterling, Ill., visited the Air Force Memorial June 7. It was the couple's first trip to Washington, D.C. Vic served in the Army as a radar technician during the Korean War. Upon his return, he married Mary, his high school sweetheart, and returned to work at a lumber company. Years later, he bought the company and still works there today.

His girlfriend at the time, and now wife, Mary Kassing, said she agreed it was something Vic had to do.

"We had talked about him volunteering," she said. "A lot of our friends were going too. So at that time, when you are young, that seems all right to do."

At 20 years old, Kassing shipped off to Army basic training at Fort Bliss, Texas, and was trained afterward as a radar operator. His first and only assignment was to the 97th Anti Aircraft Artillery Battalion in Tachikowa, Japan.

"Mine was a critical military operational specialty at the time," Kassing said. "Our position was -- my position -- was to be a radar operator to synchronize the big anti-aircraft guns to let them know where the enemy was at in the air. They were in Japan, but we were getting enemy planes there."

Kassing said he had been lucky during his stint in the military because he didn't go to Korea. Some of his friends from basic training did, however. But to his knowledge, all of those made it back home in one piece.

"They were extremely lucky," he said.

Following the war, Kassing returned to the United States and picked up right where he'd left off.

"I had my orders to come home, as the war was over," he said. "I went back to my old job, and got married two weeks later. I worked for a guy that owned a lumber company until 1972, and then bought the place. I've owned it ever since."

Kassing said he still works at the lumber company he owns, but now his three sons run the business.

Vic and Mary are both from Mt. Sterling, Ill., and have lived there nearly their entire lives. The two visited the Air Force Memorial June 7. It was their first trip to Washington, D.C., though Mary said they came mainly to see the Korean War Memorial.

"It's very touching to see the expression of those faces as they are on patrol," she said. "It brought a tear to my eye."

But Vic said seeing the Air Force Memorial was inescapable.

"This memorial is something," he said. "We've been here a couple days now. We've driven by a half dozen times, and I couldn't wait to get up here to see it and get pictures."